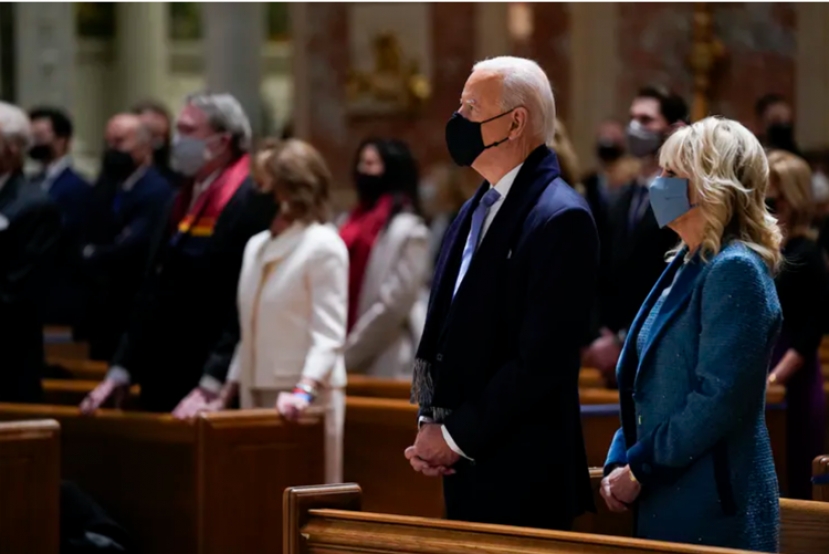 Prior to being sworn in as the 46th president of the United States – and only the second Catholic to hold the post – Joe Biden attended Mass.

Accompanied by his wife, Jill Biden, and now-Vice President Kamala Harris and her husband, Doug Emhoff, he occupied the front pew of the Cathedral of St. Matthew the Apostle, known as St. Matthew’s Cathedral. It isn’t Washington’s largest Catholic church, but it has long been a place where politics and faith meet – making it a fitting venue to start the day’s proceedings.

Established in 1840, St. Matthew’s is named for the tax collector called by Jesus to be one of the Twelve Apostles. The Cathedral is a short walk from the White House and government buildings. Fittingly for the District of Columbia cathedral that carries his name, Matthew is recognized as the patron saint of civil servants.

But if tourists to Washington visit a Catholic church at all, they probably go to the much larger Basilica of the Shrine of the Immaculate Conception. A shrine is a site for visitors and pilgrims.

A cathedral, meanwhile, serves as a home church for a Catholic diocese or archdiocese.

But St. Matthew’s – first in its original building and now in its newer 1913 structure – has been a downtown parish far longer than it has been a cathedral. Washington became an archdiocese only in 1939.

In fact, Roman Catholics were a negligible presence in the city until the mid-20th century and the election of John F. Kennedy, the first Catholic U.S. president.

And it was Kennedy’s 1963 funeral that cast history’s spotlight on St. Matthew’s for the first time.

As Kennedy’s remains were carried from the cathedral to later be interred at Arlington National Cemetery, 3-year-old John F. Kennedy Jr. offered a salute captured in an iconic photograph.

The spot near the altar in St. Matthew’s where Kennedy’s body lay as Boston’s Cardinal Richard Cushing offered his funeral Mass on Nov. 25, 1963, is marked by an inlay that designates it as the spot where “President Kennedy” rested. Using Kennedy’s civic title rather than his baptismal name is an unusual touch for a Catholic church. But it is a reminder that St. Matthew’s sits where church and state meet.

St. Matthew’s was the funeral site for Sen. Joseph McCarthy, too, as well as President Jimmy Carter’s national security adviser, Zbigniew Brzezinski. Each year, St. Matthew’s is the site of the Red Mass that marks the opening of a Supreme Court term. A nonpartisan crossroads of Catholic faith and American politics, St. Matthew’s today also is notable as the seat of the first African American cardinal, Wilton Gregory.

Perhaps St. Matthew’s is best appreciated the way I knew it. Like many Catholics who have worked in downtown Washington, D.C., I looked upon St. Matthew’s as a quiet refuge for prayer and reflection in the middle of a workday. Joe Biden is among those Catholics working and living in the neighborhood. His prayers for the nation at St. Matthew’s add to the cathedral’s deep history, and the nation’s second Catholic president will feel that history all around him.