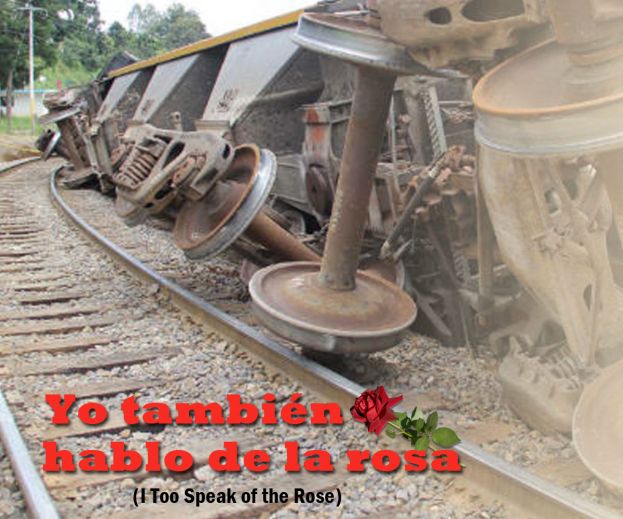 Washington, DC – GALA Hispanic Theatre continues its 41st season with the U.S. premiere of the modern Mexican classic of Yo también hablo de la rosa/I Too Speak of the Rose by Emilio Carballido, directed by GALA Producing Artistic Director Hugo Medrano. Yo también hablo de la rosa is performed in Spanish with English surtitles from February 2 through February 26, 2017 at GALA Theatre, 3333 14th Street, NW, Washington, D.C. The theater is one block from the Columbia Heights metro station on the Green/Yellow lines. Discounted parking is available behind the theater at the Giant Food garage.

In this searing look at poverty and society’s response to it, two poor teens who accidentally derail a train while skipping school become the subject of a media frenzy. As they follow the occurrence, diverse people reveal, with biting humor and wit, their socio-political views on the cause of the incident and provide insight into the complexities of Mexican life in the 1960s. In searching for the truth behind the accident, the author presents a broader view that is sometimes a hilarious political commentary, as well as a new perspective on reality.

“I was drawn,” states director Medrano, “to this play because like so many of Carballido’s plays he combines realistic and symbolic elements in which the ordinary coincides with the extraordinary. Moreover, his examination of unjust structures deeply rooted in Mexican society and history still has great relevance to societies today.”

Playing the role of the medium is Julieta Egurrola, one of Mexico’s leading actors and a member of the Compañía Nacional de Teatro. A stage, film and television star, she has appeared in more than 50  theater productions, including In memoriam, Crímenes del corazón, Querida Lulú, Clotilde en su casa, Tío Vania, and Copenhague. Her film credits include Profundo Carmesí and En el país nada, and her television credits include Mujeres de negro, Los rey, and La Lobo.  Among her Best Actress awards for film are an Ariel Award and the Mayahuel Award, and several Best Actress awards for her theater work, including the Yolanda Guillaumín Award, María Teresa Montoya Best Actress Award, and awards from several associations of Mexican theater critics.

Press Night and Noche de GALA is Saturday, February 4, 2017 at 8 pm, under the gracious patronage of the Ambassador of Mexico Carlos M. Sada. This production is supported in part by the Embassy of Mexico, the Mexican Cultural Institute, the Mexican Agency for International Development Cooperation (AMEXCID), the Secretaría de Cultura (Mexico), the Instituto Nacional de Bellas Artes (INBA), the Fondo Nacional de Cultura y Arte (FONCA), and the DC Commission on the Arts and Humanities.

Student matinees are on February 9, February 10, February 16 and February 17 at 10:30 am. For more information, contact This email address is being protected from spambots. You need JavaScript enabled to view it..

Emilio Carballido (1925-2008) was an acclaimed Mexican novelist, playwright and screenwriter. A member of the group of writers known as the Generación de los 50, he wrote more than a hundred plays and scripts, two volumes of short stories, and nine novels.  Other noted writers of the group included Sergio Magaña, Luisa Josefina Hernández, Rosario Castellanos, Jaime Sabines, and Sergio Galindo.

In 2007, Carballido and his partner of 20 years, Héctor Herrera, were among the first same sex couples to apply for a civil union following its legalization in Mexico City. Carballido died a year later in Xalapa, Veracruz, and shortly thereafter the Governor of the State of Veracruz ordered a day of mourning and announced that the State Theatre and a state literary prize would be renamed after him.

Yo también hablo de la rosa is directed by Hugo Medrano, GALA’s Founding Producing Artistic Director. He has directed and performed in classical and contemporary plays in Argentina, Spain, Costa Rica, El Salvador, Cuba, New York, Miami, and Washington. Among the more than 120 productions he has

Regular tickets are $40 on Thursday evenings and Sundays, and $45 on Friday and Saturday evenings. Senior tickets (65+) are $30, and student and military tickets are $25. Groups (10+) are $22 each. To purchase tickets, call 202-234-7174 or visit www.galatheatre.org. Tickets are also available on Ticketplace and Goldstar.