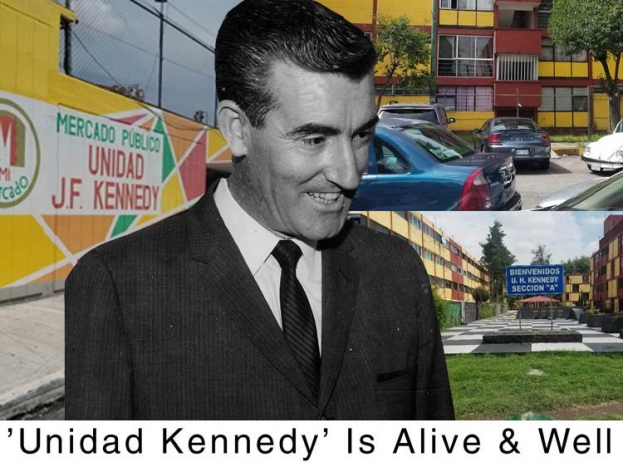 I recently returned from a visit to Mexico City (CDMX) for the first time in over 40 years. I'd lived there for an extended period during my adolescence with my father, Jose 'Pepe' Sueiro. My father emigrated to the United States when he was a young man married, and later divorced, my mother whom he had known since childhood in the town of Pontevedra (Spain) where she was from. Born in the seaside village of Sanxenxo, he was a merchant marine when he arrived in New York City and ended up remaining in the country, based in the United States and Latin America for the rest of his life.

Many years later 'Pepe' became an interpreter for the State Dept. and through his charm and proclivity for languages translated at the White House under President Kennedy. He was also involved in national labor union politics and became known to the AFL-CIO and the union movement. When the Alliance for Progress was launched in the early 60's he was assigned to Mexico as Country Program Director working on social programs that would highlight U.S. solidarity with that nation.

Among his many activities by far the most important was an affordable housing component that would build over 3,400 units of affordable housing in a building project ultimately titled, 'Unidad Habitacional Kennedy'. It was located in the Jardines Balbuena neighborhood near the airport - at that time on the outskirts of the Mexican capital and now considered a 'close in' neighborhood to city center.

Fifty years later, 'Unidad Kennedy' is as vibrant, clean, neat and affordable as it was designed to be when built. A cooperate agreement among the Graphic Workers Union, Mexican Housing Authority and U.S. Agency for International Development is respected and in place to this day. Through four earthquakes, over a half dozen Mexican Presidents and numerous changes in union leadership, 'Unidad Kennedy', remains an example of affordable home ownership, famous throughout the city as I came to realize.

During my visit in August of 2018 I hired a cab driver for a 2 hour tour of the project which spans a 10 block area wrapped tightly around the gateway road to the airport. We visited the administrative headquarters, food market and cultural center and took numerous photographs. The complex had just been repainted in its distinctive red and beige pattern (see photos). The grounds were impeccable, dotted with playgrounds, daycare centers and welcome signs. As I took pictures the cab driver suggested I looked like a child with a new toy. It was quite an emotional experience.

I remember clearly when I lived in Mexico City as an adolescent those brief, magical moments when my father would confide in me about the challenges and obstacles he was up against working on this housing project. He would take me for Sunday brunches where I would pepper him with questions and we'd drink Bloody Mary's (only 1 for me)!

I also recall a memorable anecdote about the day a concrete contractor came to his office, placed a blank check on his desk and told him to fill out the check with whatever name and number he wished, in return for his signature on a contract. When asked who to make it out to my father's answer was to 'Unidad Kennedy'. The concrete contractor complained that my father hadn't understood and he answered; 'I understand perfectly', and that was the end of their conversation.

What I know now, from what I observed in CDMX is that the genius of this well built and maintained project was mainly in the artful and sophisticated agreement Pepe negotiated with all of the parties involved. Today the graphics union is far removed from its pivotal original role but still maintains the grounds and is part of the condominium regime. Both Mexican and American governments abide by the original financial terms and guarantee affordability. And the people who live there still consist of many second generation residents who care about where they live and are active in its maintenance and the security of the neighborhood. 'Unidad...' is truly a unique and majestic achievement on my father's part given how difficult it was (and still is) to build an affordable housing complex such as this one and keep it secure and vibrant still over the long haul.

There is no Jose Sueiro street or other recognition of his contribution to the creation of this housing complex, but I know, I was there and saw how he labored for close to 2 years on this project. The many nights he cajoled and convinced union leaders and government officials over whiskeys and tequila. His bouts with the Ambassador and A.I.D. bureaucracy trying to get them to sign on to the deal. How he -who hated to fly- travelled repeatedly to keep the American actors involved and supportive. It was a remarkable achievement, possible only because those were other times in a different world and, of course, because of the vision of John F. Kennedy.

It was Robert Kennedy who came to the inauguration of 'Unidad Habitacional Kennedy' for his recently assassinated brother. He, too, was moved by the intensity of emotions on the part of the Mexicans. He, too, became a friend of my father's until his own death less than 4 years later. I would come to understand as well my father's admiration and dedication to the Kennedy's. They were an integral part of his career and, had they lived, would probably have furthered his promotion and success.

I had a difficult time finding mention of my father or even any information on the building of 'Unidad...', but I did find a mere mention of the project in a 1993 retrospective of President Kennedy's 1962 visit to Mexico published in the Excelsior newspaper (https://www.excelsior.com.mx/global/2013/11/22/930025) where the idea for the 'Unidad Kennedy' was planted. Here is the brief sentence;

"Other traces of that visit to [Mexico] City are the 'Unidad Habitacional Kennedy' in the   Balbuena [neighborhood]; the primary school 'United States' at Francisco del Paso and         Troncoso, and a hotel with the name of the ex-President: Kennedy."

It is a mere mention, but it highlights the contribution of an immigrant to the United States who made it on a grand scale and was able to give back to a country that opened its arms to his talent and genius. It is no wonder that both son and grandson are spending their lives active in the struggle to bring prosperity and respect to immigrants today here in the U.S. His brick and mortar legacy is alive and well in Mexico and lives in the hearts of his descendents... and those whose lives he changed in Mexico.

My favorite refrain from a Garcia Lorca poem is appropriate here as a memoriam to my father. I love you 'Pepe' and miss you even now: