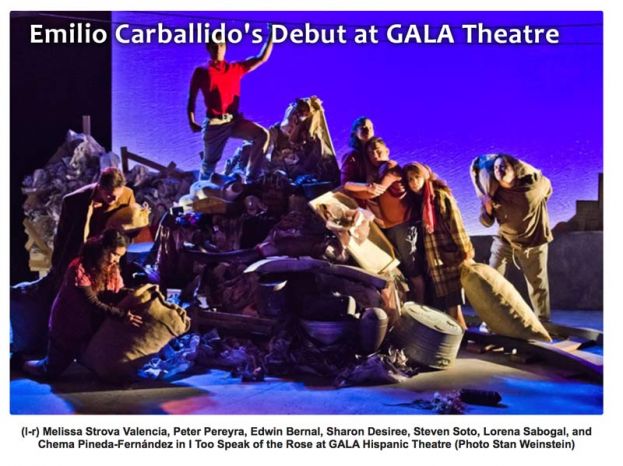 The prolific Mexican playwright, Emilio Carballido's, "I Too Speak of the Rose", a forceful montage of realistic and dreamlike sequences wrapped around a multi-layered plot, recently had its Washington DC debut at GALA Theatre where it will be performed through February 26th. It is a fine example of his theatrical legacy and one of his most popular works. In as much as it is stylistically and thematically central to his vision and message it is a key component of modern Mexican theatre, studied and performed with frequency across the country.

Carballido's work is known for its soliloquies and asides, its multi-textured plots and its social realism juxtaposed in this play with dreamlike, magical elements. Indeed, an abstract, intellectual form of social realism permeates his writing. "... Rose" is no different. Through the prism of an accidental train wreck the actors explore all the 'alternate facts' created by the event and how various sectors of Mexican society view the tragedy.
A pair of teenagers, ably played by Sharon Desiree (Toña) and Steven Soto (Paolo), precipitate a tragic train wreck that repeats itself throughout the play followed by various interpretations of the result that highlight the teenager's poverty, insecurity, amorality and/or sexual naiveté. All these interpretations are meant to be a statement about contemporary Mexican reality. Weaved in and out of the play is a Medium performed by Julieta Egurrola, who functions at times as a prophetic witch, Greek chorus, bad omen or vestal virgin. Her soliloquies and asides are at times philosophic, mesmerizing and sometimes downright frightening, especially when combined with the booming, crashing sounds of a train wreck which had audiences bouncing in their seats from the sheer intensity of the decibels, as if the audience were being lambasted with Mexican pepper spray!
Hugo Medrano has returned to direct what appears to be one of his favorite authors. In as much as the piece clearly tries to explain something about the state of Mexican society and the problems and contradictions that exist there, it can be said that this is a purview of the conditions of our current political reality. Nothing is at it seems and everything can be converted or, more accurately perverted, to whatever viewpoint you wish to consider real.
Performed Thursdays through Sundays, click on galatheatre for further details.