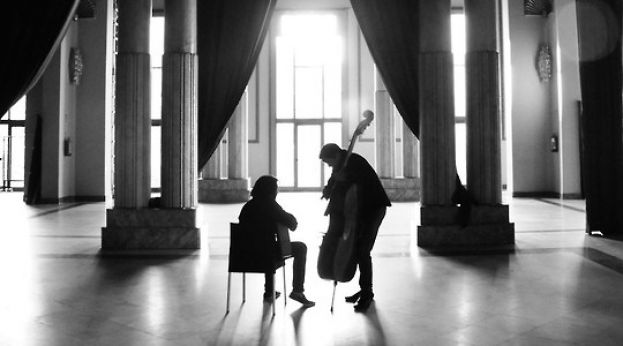 I first met Javier Colina in one of those smoked filled jazz nightclubs in Madrid, don't remember if it was Cafe Central, Sala Clamores or the old Whiskey and Jazz. What is certain is I first heard him with Jerry Gonzalez, my friend the trumpet and conga player who has achieved iconic status in Spain as one of the finest jazz, or more specifically Latin Jazz, players on the Iberian peninsula.

In the States, on his home turf in the Bronx, Gonzalez was famous for performing with his brother Andy Gonzalez on bass with such luminaries as Dizzy Gillespie and McCoy Tyner. The Gonzalez brothers formed the legendary 'Conjunto Libre' with Manny Oquendo replicating the original 'trombanga' sound they performed with Eddie Palmieri. Jerry also became popular and had a few hits with his Ft. Apache Band. In Spain, Colina fit right in with Gonzalez's group and it seemed as if he were born to the idiom. He added the 'fondo' flamenco and packed a tight swing with his bass playing. Jerry created unique musical groups in Madrid such as the 'Comando de la Clave' and 'Los Piratas del Flamenco'.
I last saw Colina at the Baluarte Concert Hall in Pamplona in August of 2015. He was there with an all star jazz group that included Juan Pardo maestro on the wind instruments (who visited DC this past November), Gonzalez on his classic muted horn and high pitched conga and the Cuban pianist Javier Massó, 'Caramelo'. It was at a flamenco/jazz festival that included, among others. the Carmona brothers of Ketama fame.
Josemi Carmona was an original member of "Ketama" along with the Carmona brothers Antonio and Juan Miguel. The legendary Ketama, a pioneer of the flamenco fusion idiom began as a trio, featuring brothers Antonio and Juan Miguel Carmona and their cousin, Josemi. Ketama was one of the leading groups of the "new flamenco" movement. Since releasing their self-titled debut album in 1985, the trio directed the evolution of flamenco as a world-savvy music. Their albums fuse flamenco with salsa, Brazilian, reggae, pop, funk, jazz, and hip-hop influences. Folk Roots wrote, "harmonies, masterful melodies, exquisite pace and timing deeply satisfying ....reaching points of the brain/body most music snoozes past."
The three members of Ketama represent the fourth generation of a musical family that traces back to guitarist Ico Habichuela. During their 20 years together they shared stages with Paco de Lucia, Enrique Morente and Camarón De La Isla. After building their reputation with their virtuosic playing and vocal harmonies, they went on to play with Celia Cruz, Paquito D'Rivera, Arturo Sandoval, and Michel Camilo. Ketama secured their fame as opening act for Prince and the Rolling Stones.
Javier Colina and Josemi bring a unique brand of harmony and jazz, a combination of lilting melodies, ballads and flamenco roots with the contrapuntal improvisations of a jazz master on the bass. This intriguing duo will be delighting fans of this music on Thursday, March 9, 7:30 to 9 pm at the Former Residence of the Ambassador of Spain at 2801 16th St. NW. To purchase tickets or seek more information go to: https://www.spainculture.us/city/washington-dc/josemi-carmona-javier-colina-de-cerca/