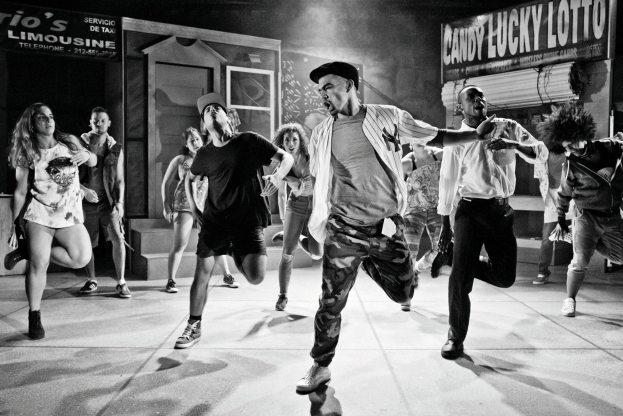 In The Heights En Español, directed by Luis Salgado, is a bilingual adaptation of Lin-Manuel Miranda’s mid-2000’s original musical. Colorful, humorous, and at times somber, the play centers around the struggles and romances of a primarily Latino community in the Washington Heights neighborhood of Manhattan. Usnavi (played by Juan Luis Espinal) shoulders the legacy of his parents: a convenience store in “the barrio,” while looking after his younger cousin and his dear “abuela.” Meanwhile Nina (played by Laura Lebron) returns from Stanford to tell her parents that she lost her university scholarship. Once considered a star student, Nina deals with the guilt of having disappointed her parents and her community. Nina and Usnavi grapple with these issues while simultaneously pursuing their respective romantic passions. Usnavi musters up the courage to talk to “popular girl” Vanessa (played by Veronica Alvarez) who works at a beauty salon. Nina develops affection for Benny (Vaughn Ryan Midder), an African-American employee at Nina’s father’s Taxi/Limousine service.

The play incorporates many of the traditional Latino character types: Nina’s mother Camila (played by Shadia Fairuz) is the wise and strong Latina mother, Abuela Claudia (played by Michelle Rios) plays the spiritual, affable, and loving elder who provides guidance to Usnavi and Nina, and Nina’s father Kevin (played by Jose F. Capellan), is the proud machista father. These character types are positive depictions of Latinos which serves to break the common and unflattering depictions portrayed in mainstream media. At times, it’s positive intent felt more like a Disney production, clichéd and oversimplified, than nuanced social commentary. It does however touch upon anxieties that are very real to the Latino community today.

Perhaps the most poignant moment in the play came when Nina’s father, after hearing the news that Nina lost her scholarship in part because of how much she had to work to pay her tuition, expresses his disappointment… in himself. Kevin chides Nina with his disappointment before turning on himself. “Soy inutil, useless” Kevin says. He questions his ability to take care of his family, to be the best father he can be, and to honor what it means to be a man. These few minutes where Kevin explains his frustration, with himself, with no one, with everyone, nearly brought me to tears.

Kevin’s insecurity is not unique. Throughout the play, the collective feeling of insecurity is seldom explicitly articulated, but is present throughout just beneath the surface. Poor Latino families, Latino immigrants and the subsequent generations, face difficult questions about assimilation into American society. How do we make a living without knowing the language or culture of this country? How do we navigate a system that wasn’t designed by or for Latinos? What kind of life must we lead in order to preserve our heritage yet integrate into an alien society?

The depth of Kevin’s failure is not produced by his inability to help Nina, it is formed in the subtle feelings of inferiority to the “gringo” American and the challenges inherent in obtaining the “American dream.” We see what is desired for that lifestyle; the suburban home, the family values, kids who go to college, and we face a reality in which obtaining that life is not as easy for the Dominican business owner in Washington Heights as it is for the fourth-generation American professional living in suburban Washington DC. The insecurity felt by the Latino collective stems from a false equivalence in which the Latino wants to be like the gringo American but is living an entirely different experience than the gringo ever lived. Kevin’s feeling of uselessness is shared by the undocumented immigrant who works 60 hour weeks at $8 an hour but struggles to make ends meet, it’s shared by young Latinos who watch as their gringo classmates are showered with gifts and support from their parents while they save up money for a textbook by working at the grocery store after school, it’s felt by the Latina tamale vendor who sells her food to the newly arrived young professional couple who moved into the luxury apartment down the street, and it’s felt by the neighborhood drunk, who long ago lost faith and succumbed to despair.

“It’s about humanity,” Mr. Salgado explained in a Q&A after the play ended. At its core, In The Heights and Mr. Salgado are seeking to answer the questions of what it means to be Latino in the United States. But whereas in the mid-2000’s we could see this play as a celebration of our cultural roots and the innate “humanness” embedded within our core American principles, today we look at Mr. Miranda’s creation a bit differently; as a reminder of our fear of never truly becoming part of this country and the uselessness of our efforts to do so.

RT @Cbluedreams: “The recall was largely fueled by anger surrounding the governor's handling of the coronavirus pandemic.” Wrong. This was…

RT @robreiner: We have a two party system where one party is in favor of overthrowing the government and dying by a deadly virus.

RT @AdlaisWorld: The author of the Texas abortion bill said that overturning Roe v. Wade will make women practice abstinence. Now I have a…

RT @BakerHugh: The sad truth is, it didn't need to be the worst pandemic in 100 years..It was Trump's and the Republicans.. WE NEED TO CRUS…

RT @joshtpm: wait till he hears about buying a ticket

RT @BaddCompani: When ya all gonna realize trumpf, Barr and McGahn blocked, impeded, and shut down so many investigations into anyone surro…

RT @KaivanShroff: Republican congressional candidates are speaking at the “Justice for J6” rally for domestic terrorists and domestic terro…