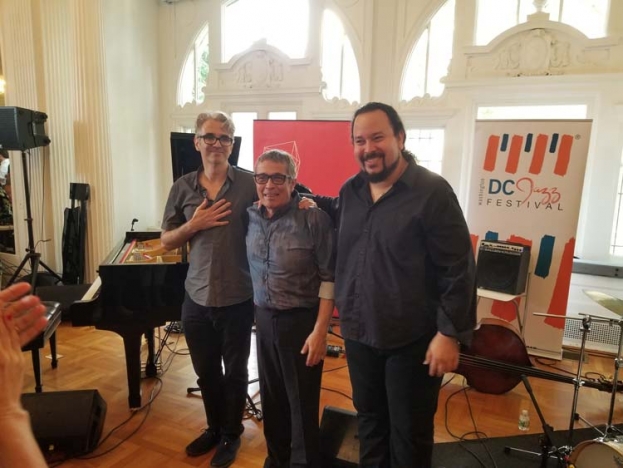 Spain Arts and Culture closed out its performance season in Washington DC on Saturday, June 15, 2017 with a lively concert of flamenco tinged, Latin Jazz music with the consummate Spanish jazz pianist Chano Dominguez and his trio. This is the fourth jazz concert of the season at the charming, intimate, 'Former Residence of the Ambassadors of Spain', a long title for a  boutique performance venue that seats barely 100 people at a beautiful ballroom in the rehabilitated mansion along 16th St.
Produced in collaboration with the DC Jazz Festival and followed by a question and answer session with the artist that was moderated by the inimitable Jim Byers, he of WPFW fame with his Latin Flavor Classic Edition program and his passion for vintage cars. Byers is perhaps the single most influential 'salsa' expert in town, a virtual cultural anthropologist of Caribbean music.

Nominated for a Grammy for his album, 'Flamenco Sketches' and having performed with such artists as Paco de Lucia, Wynton Marsalis and Paquito DeRivera, Mr. Dominguez demonstrated his versatility and the influences that have shaped his music with an hour long session that left his audience eager for more. His selections ranged from an adaptation of Miles Davis's 'Freddy Freeloader' to the brash 'Rumba for Jerry' an homage to the great trumpet & conga player who resides in Madrid and has revitalized the Latin Jazz idiom in Europe.
Chano, born in Cadiz, started with the rock and roll group CAI and went on to perfect a sound that is unique and rare. Among his influences is the legendary blind pianist Tete Montoliu who was performing in jazz venues across Spain in the 50s and 60s. He's able to incorporate the percussive piano playing of Latin stars such as Eddie Palmieri with the strains of flamenco fusion learned from De Lucia, one of his mentors. He adds to that his knowledge of the music of Miles Davis and John Coltrane to provide a sound that blends all of these extraordinary influences into a potpourri of post bop, flamenco infused, Latin jazz fusion.
Spain Arts & Culture has showcased new and promising jazz artists from Spain this entire season. They began with the prolific horn player Jorge Pardo, continued with the young 'cantaor', Antonio Lezama, topped that with the composer Josemi Carmona of Ketama fame (together with bass player Javier Colina) and have now ended the extraordinary season with Mr. Domiguez. It's hard to imagine a more versatile and challenging season of jazz/flamenco anywhere, as if we have witnessed a slow moving festival of aspiring Spanish flamenco/jazz talents. Bravo Spain Arts & Culture for a grandiose, daring and risky sampling of the finest artists in the idiom. Visit www.spainculture.us for a complete listing of the myriad of events across the U.S.