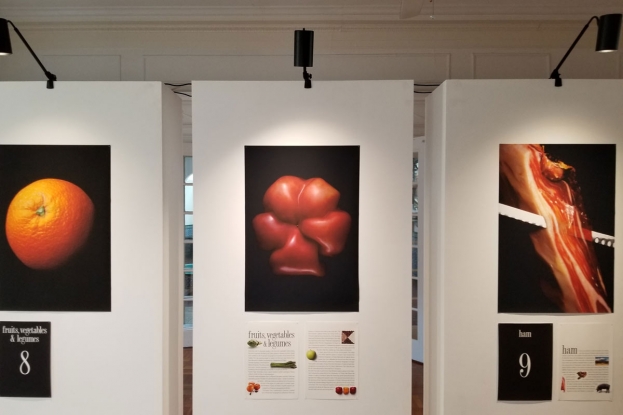 - This rise in Spanish creativity has immigrated as well ... and America is starting to catch on.

The simple meaning to this complex looking title is on display at the Former Residence of the Ambassadors of Spain (the mansion at 2801 16th St. NW) as part of a fascinating, month long exhibit titled: #EatSpainUp. Essentially what Spain Arts and Culture, the cultural arm of the Spanish Embassy, has done is present the plain, daily ingredients and elements of Spanish food in an exalted, artistic fashion complete with art exhibit, designer chats and culinary presentations at various Spanish restaurants around town.

At the opening of the exhibit on Thursday, September 21st, there was an introductory chat by the designer Manuel Estrada (see his work at; www.estradadesign.eu). His drawings and photographs of Spanish food staples in odd and imaginative combinations filled the space. A pomegranate with two rusty nails, an Ikea pencil imposed on a magnolia leaf as the cover to a book of poems by Antonio Machado, the sensual lips of a model covered with parsley, a bowl of saffron and a broken 'jarra' (pitcher) glued together as a symbol of tradition and the past pasted together for the future were part of the exhilarating and bewildering exhibit. The mansion at 2801 16th St. is covered with a series of images that jolt the imagination and make the observer think about the common elements of Spanish cooking combined in jarring and imaginative ways.

Also at the opening of the culinary exhibit were five leading Spanish restaurants that gave out samples from their menus. These 5 are also going to host events at their venues during the month of October (so keep a look out or go to www.spainculture.us for more details). The participating restaurants are; La Taberna del Alabardero, Jaleo, Boqueria, Mola & Pamplona. These last two, MOLA in Mt. Pleasant and Arlington's Pamplona are barely a year old.

The idea of juxtaposing food as both something you eat and something you admire as art & culture is not new, but the ingredients of this exhibition are quite attractive and signal a new level of promotion and marketing for Spain based on their culinary traditions and their most basic attributes -their food culture. Given that last year there were more tourists visiting Spain than ever before, more than their entire population of 46 million people, this is probably a savvy investment. Jose Andres, the outstanding brand for Spanish cuisine, is involved in this promotion and remarked for the program: "Now is the perfect time for Spain, with all of its rich culinary history, to be able to share some of its gastronomic soul, one bowl of gazpacho at a time. with America... from one melting pot to another:...