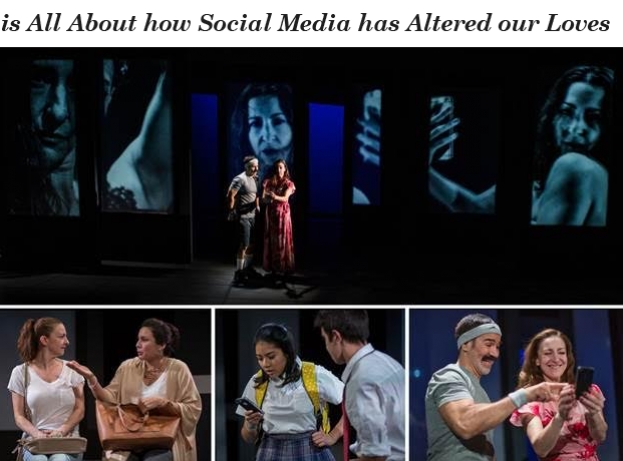 Laura, performed by the ever fabulous Luz Nicolas, copes with her age and solitude by reconnecting with an old boyfriend. A 48-year-old single mother, Laura courts Denis, played by Carlos Castillo, via Facebook where they reminisce about nostalgic memories before exchanging romantic overtures. A confused or perhaps reckless Denis dithers between his desire to leave his wife Thais, played by Maria Peyramaure, to pursue an exciting relationship with Laura or maintain his devotion to his family.

The play centers its focus on Laura and Denis, and the fallout from a risqué selfie meant to coax Denis into a decision. As the picture of Laura goes viral and their families react, the play explores the psychological undertones manifested through the use of technology. Laura is driven by a sudden sensitivity about her appearance and her loneliness; she looks for romance online, she changes her wardrobe to look younger and she carefully photo shops her selfies before sending them to interested suitors.

Denis entertains Laura’s proposition not simply out of romantic idealism but to soothe his insecurities. After Thais asks Denis for a divorce, Denis attempts to explain himself to his son Frank, interpreted by Jose Gonzalez. Denis recounts his efforts to also enhance his physical appearance through weight lifting. He invested enormous time and effort to shape his body and appear powerful and masculine but in the end, succeeds only in growing 'man boobs'.

Director Abel Lopez employs a dark and nervous humor throughout the play. Mr. Lopez creates tense moments that switch between comedy, drama, and absurdity. During a dramatic argument between Denis and Thais, the 'machista' Denis finally comes clean about his interactions with Laura and her selfies. In an attempt to explain himself, Denis declares that “Facebook es el infierno de los felices.” (Facebook is a hell of happy people) The line garnered nervous laughter from the audience. It was the most poignant moment in the play and one whose spirit was at the core of its message.

Facebook is indeed a hell for happy people. Denis’ obvious irrationality and denial of any wrongdoing is the uneasy facade through which his profound insight is delivered. The characters in the play embody the psychological affects that are born out of today’s uses of technology. We don’t like how we look so we place filters on our pictures, we’re unhappy with our marriage so we flirt with an old flame on Facebook, we see only the happy, positive, and “good” captured on social media and we compare these experiences to our own, we suppress the yin and obsess over the yang. As a result, we create a distorted reality, one where everyone appears happy but no one feels whole: a hell for happy people.

Choppy at times, the flow of the play mirrored a typical online experience with short, uneasy, and visually sleek scenes. The set, aligned by tall canvas like panels, reminded me more of a minimalist themed website powered by WordPress than a home, a high-school or a grocery store. Through this lens, the play felt like a series of Instagram videos sliced together into one long “Instastory.” It served as a subtle reminder of the detachment with which we navigate the world. With smartphones a reach away, a serene and melancholic moment is interrupted by an impulse to “snap” a video and share it with the world. We no longer own unique moments but are instead nudged through push notifications to share our experience with the world.

While the play focused more on the fallout from the selfie, it was these themes of insecurity, mortality, and family, and how these are affected by technology that gave the play meaning. As technology becomes more available and more powerful, we’re reminded of the human sensibilities that give depth to our experiences. Passion, melancholy, and reflection are more important now than ever and yet fall by the wayside as capitalist coders and website designers compete for our attention.

You can find more information or reserve your seats for the show at www.galatheatre.org or by phone at 202-234-7174. Performing now thru February 25th