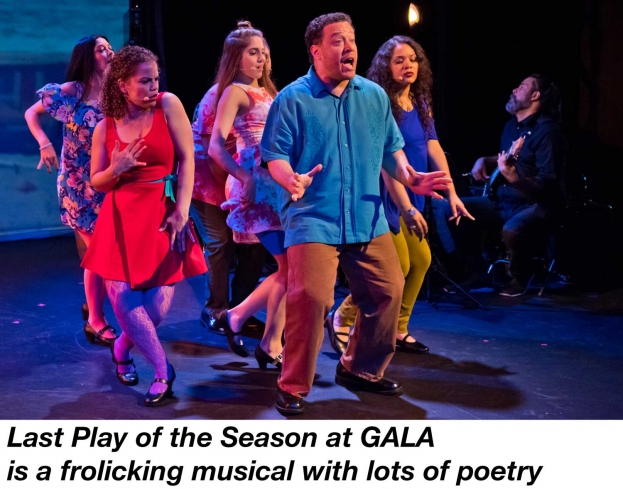 Think the energy of West Side Story, the language of the Nuyorican poets with a pinch of Kafka and a twist of Joe Cuba and you get an idea of what the new play at GALA Theatre, "Dancing in my Cockroach Killers", is all about. Six young Puerto Ricans, mostly from the Bronx, dance, sing and recite poetry from the heart of the Boricua repertoire.

You will find echoes of West Side Story in the heartbreaking poem about Hurricane Maria sung by Caridad de la Luz and appropriately titled, 'Maria'. There is the flaming beat of 'Madre de Bomba' performed by master percussionist Nicky Laboy and danced to by Yaremis Felix. In between the 6 member cast cavort around the stage to the sounds of Joe Cuba's 'Bang Bang' and whistle the theme of another great Joe Cuba classic, 'El Pito' (I'll Never go Back to Georgia). It's the mixture of movement, poetry and song that moves the evening along at breakneck pace.

The blend of old and new, sassiness and sadness brought tears at times and goose bumps throughout. Magdalena Gómez, the poet has captured the essence of the 'Nuyorican hood' with passionate, soaring poetry and dramatic backdrops. She is the poet laureate of Bronx Latin, the sorceress of quixotic Boricua quests. Among the most poignant moments was a plea for the 4,625 islanders dead as a result of Hurricane Maria which became a cry for help and respect for Puerto Rico. The entire night was spent as if in one of those dance halls under the 'Bronx El', where sashay skirts and ultra-high heels abound and salsa erupts from 2nd floor clubs with busy dance floors and plenty of shouting and drama!

Conceived and directed by Rosalba Rolón in collaboration with Pregones Theatre/PRTT in New York City, GALA concludes its 42nd season with this lively musical that will run Thursdays through Saturdays at 8 pm and Sunday matinees at 2 pm until July 1, 2018. Go see it, you'll have a good time. More information about the show at GALATheatre.org, or by phone at 202-234-7174.