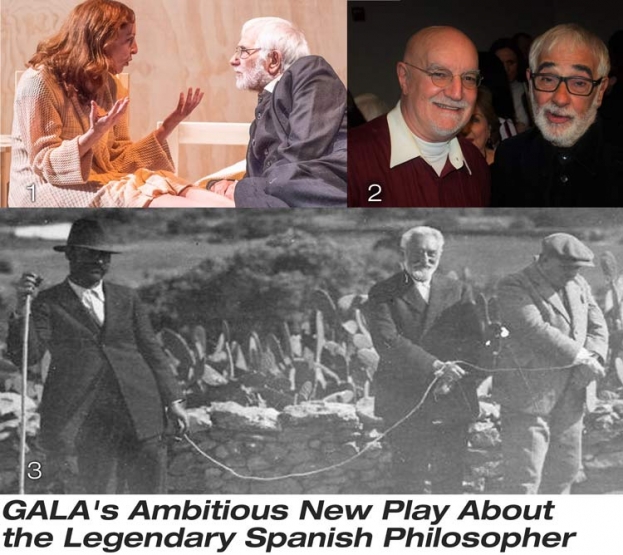 1. A moment from 'The Old Man, The Youth and the Sea, GALA's latest masterpiece. 2. Horacio Peña, the masterful lead actor who represents Unamuno in the play converses back stage with the author of this review. 3. Famous foto of Unamuno in Fuerteventura from ABC magazine, playfully tied up on the beach in a flight of fancy with fishermen and others.

If for no other reason, you should take in the latest show at GALA Theatre, 'The Old Man, The Youth and the Sea', to witness the tour-de-force performance by Horacio Peña who inhabits the main character of Miguel de Unamuno with authority, grace and charm. The play is a recreation of the 4 month exile in 1924 of the formidable Spanish writer and public figure to the island of Fuerteventura by the Spanish dictatorship of Primo de Rivera. 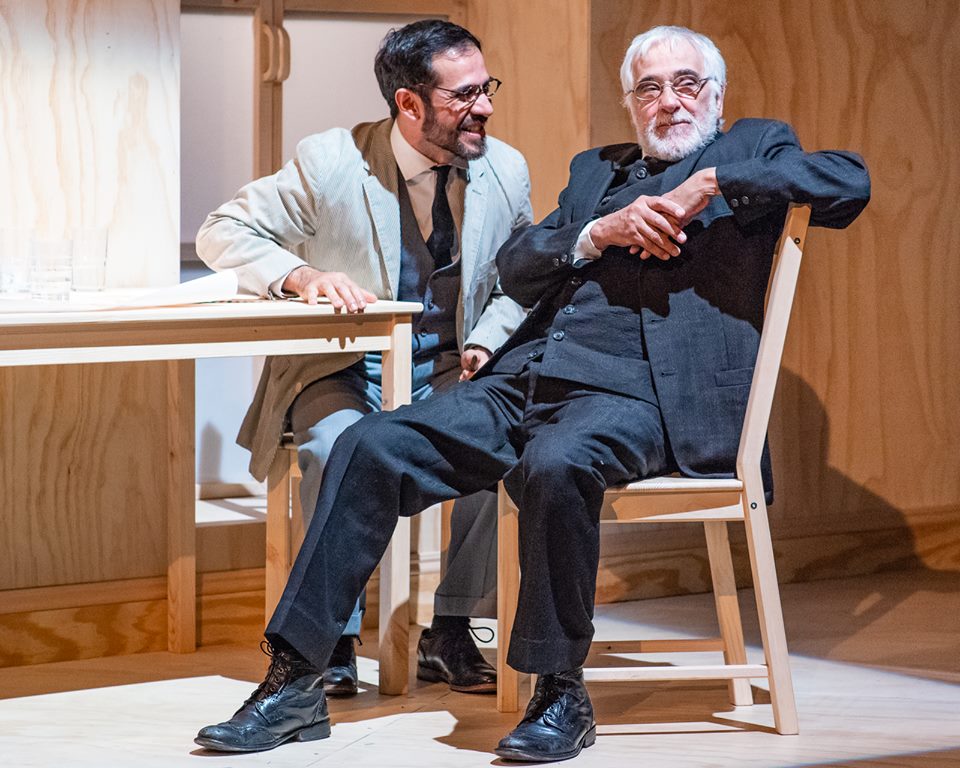 As a lifelong admirer of the 'Generation of 98' philosopher, educator, writer and social critic, I've admired Unamuno's work since high school in Madrid. His influence on my intellectual development was profound, but even more so, his counsel in moments when I suffered a crisis of faith. For that was the lifelong quest of Mr. Unamuno, the search for certainty in spiritual matters and the constant juxtaposition between the rational mind and his profound spiritual beliefs, what he called the tragic sense of life. In my view this conundrum is best exemplified in the novel, "Saint Emmanuel the Good, Martyr" and the rich, eclectic book of poems, "Romancero Poetico" he wrote late in life.

He was also one of the leading liberals of his era. His scathing diatribes against dictatorship and injustice in Europe were renown and the undertow of politics infused much of his writing. His speech in Salamanca in 1936 'You will win... but you will not convince", opposing the fascist Millan Astray from the same stage, is one of the most famous speeches of the Spanish Civil War. 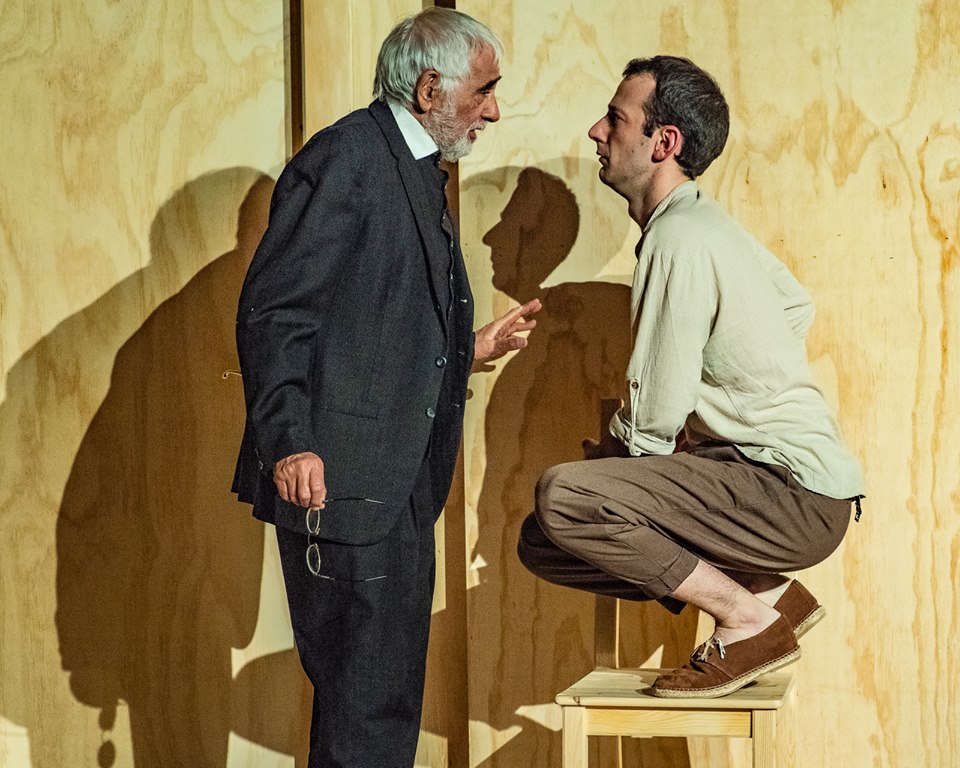 Much of who Unamuno was, is transmitted through the performance of Peña. He sports the typical horn rimmed glasses, black, 3 piece suit, uniform of intellectuals in the day, cropped beard and mop of white hair that characterized him throughout his later years. Peña eschews acerbic nuggets of wisdom ('Unamunisms') in carefully crafted speeches that unexpectedly pop into the audience's consciousness and provide food for thought. The austere, bright, sand colored set, all straight lines and angles, highlights the desert island hotel room which is where the entire play takes place. All of this is what's right with the play.

Nevertheless, the play is fraught with incongruities. The four months in Fuerteventura are but a miniscule fragment of what was a monumental career. (an ABC article called it a Quixotic adventure: https://www.abc.es/cultura/cultural/abci-destierro- 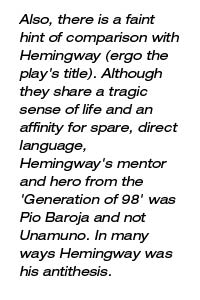 unamuno-fuerteventura-aventura-quijotesca-201611171835_noticia.html). Written by Spanish playwright, Irma Correa, the efforts to inject comedy and romance into the story seem contrived. Among the most theatrical -and tragic- events in Unamuno's life was the 1936 speech on stage with Millan Astray and Carmen Polo de Franco. Nothing from that episode or his years as Dean of the University during the Republic are part of this story.

Also, there is a faint hint of comparison with Hemingway (ergo the play's title). Although they share a tragic sense of life and an affinity for spare, direct language, Hemingway's mentor and hero from the 'Generation of 98' was Pio Baroja and not Unamuno. In many ways Hemingway was his antithesis.

A more illuminating adaptation would have included more on the doubts Don Miguel had regarding mortality (and immortality), his obsession with honor and ethics, his grand philosophical struggles and less comedy or romance. Unamuno's anxieties about his exile and whatever erotic fantasies he may have had about one of his admirers seem less important than his lifelong battles with the meaning of life, the importance of critical thinking and how we live a virtuous existence. Unamuno was ascetic but not an aesthete, stern but not without compassion, severe and taciturn yet given to flights of fancy. Much of that does not come through in this original, yet limited, script.

But I split hairs!!! Watching this play at GALA Theatre made me marvel at how ambitious, exceptional and talented GALA Theatre has become. It's not only the Helen Hayes awards, the sleek and sophisticated sets or even the ambitious ensemble period pieces and musical performances. GALA has committed itself to take on difficult material, original compositions and international partnerships to present the very best theatre it knows how. Quite an extraordinary feat and a community treasure. The District should figure out a way to provide stable, permanent, on-going support for this glorious institution, a cultural champion in the nation's capital.

Go see this show in all its glory... Information at www.galatheatre.org.