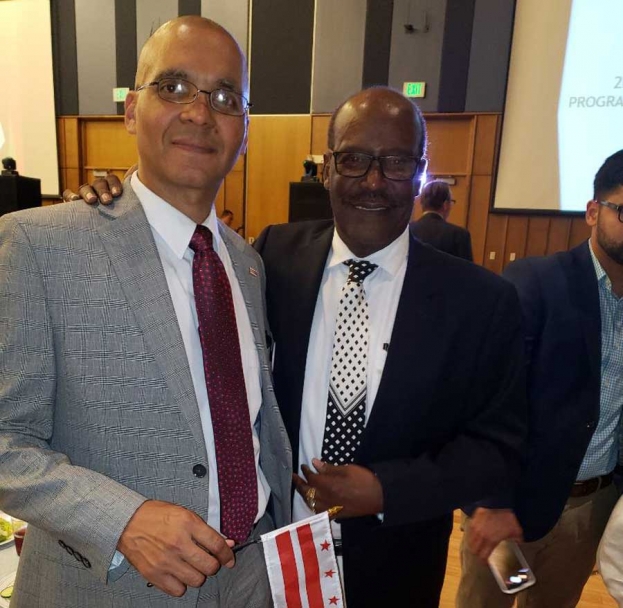 Recently I had the pleasure of attending the Caobas Foundation dinner and shared an evening with 2 of my favorite people. That evening Daniel Bueno received an award for his lifetime of achievements and Franklin Garcia, DC's Shadow Representative and its most active crusader for DC Statehood, was present as well. The picture that accompanies this feature was taken that evening.

I'm particularly proud of the work being done by Franklin Garcia, having collaborated with him since the late 90's on initiatives promoting and improving the Latino community and the lives of Hispanics living in the District. Franklin has dedicated himself to public service and been a force for good and progress for close to 25 years now. He began volunteering for democratic forces in his home country of the Dominican Republic and quickly became associated with community groups that encouraged and supported the development of the Latino community here in DC. I collaborated with him on what was then called the Latino Agenda and watched as he created the DC Latino Caucus and began his successful run for Shadow Representative. Over 125 thousand people voted Franklin into office twice now and he's among the top vote getters in the District. Since his re-election he is everywhere with his classic DC Statehood flag which shows up in almost every picture he takes. He is one of the most popular and busiest politicians in town. He publishes his very own digital newsletter and has been the communications director for the DC Democratic Party. He's well known and beloved in Democratic circles and we can only hope that someday, once Delegate Norton retires, he will become the District's official delegate to Congress.
I have recently been tasked with chronicling the life of Daniel Bueno and his wife Coco and bringing to light what is an epochal and groundbreaking journey. As you can read elsewhere here on Metrodiversity.com, the gist of his story is that with little more than the clothes on his back he became, with the help of His Salvadoran spouse, Maria Socorro, affectionately referred to as 'Coco', the most successful impresario in the history of Latino DC. I have already posted numerous stories about Daniel and am in the midst of producing a live performance of; 'The Life and Times of Daniel and Coco Bueno', which will consist of a 90 minute interview of the couple with guest appearances by many of the famous artists they first brought to Washington followed by a question and answer session. We have already produced five hours of audio/visual testimony for the Smithsonian Institute's Latino Center that will be archived at the national museum as the Daniel Bueno archive.
I have been blessed to have two such good and successful friends. They are the bounty of a life serving our community and I look forward to many more joyful and enriching moments with them.