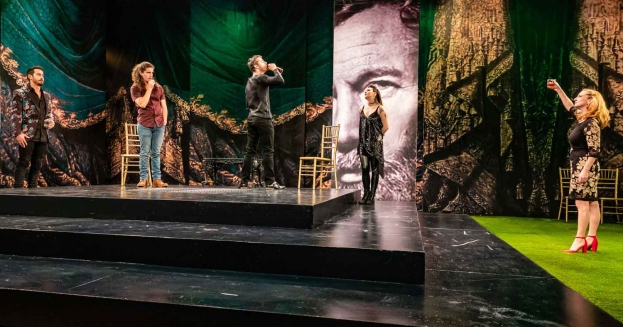 The current production of "Exquisite Agony" is a dense, searing, original play expertly written and directed by the current prodigy of the American theatre world, Nilo Cruz. It's difficult to imagine how this author sat down and attempted to write a story about a man who has a heart transplant and the donor's wife who becomes obsessed with the man who has the new heart and wants to attribute to him the characteristics of her dead husband. Although the themes are universal; the fear of death, the longing for lost love, the difficult diva. the abuse of unloved children in a dysfunctional marriage, the theatrical device to express these themes is oddly served by the story of a heart transplant.

Whereas Nilo's other plays, such as his Pulitzer prize winning "Ana in the Tropics" which debuted at GALA in the past, although extravagant, had reasonably foreseeable plot mechanics, 'Exquisite...' had me wondering from the opening scene why the device of a heart transplant was used to express the conflicts and emotions of the characters. It gave the play a grisly, macabre orientation and left this audience member wondering about the strength of the heart, the effects of such deep emotions and interpersonal conflicts on a weakened heart and the series of medical complications that could arise from this condition. Knowing a real heart transplant donor as I do, I kept wondering if the young protagonist (performed by Joel Hernandez Lara) was going to have heart palpitations or keel over dead at some point in the show. The theatrical device became the focus instead of the other elements in the piece.

Undoubtedly Nilo Cruz is deserving of the fame and acclaim he has garnered. Nevertheless, this play is filled with harsh conflicts that provoke sadness and dread. There are moments of high comedy (in particular from the Doctor, played admirably by Ariel Teixidó) and an exquisite scenic design (from Clifton Chadick) but mostly there is conflict and anger and the desire and longing of a past-her-prime opera diva who is lonely and fading fast.

The opera diva is performed by the extraordinary Luz Nicolas. One of the most brilliant and accomplished actresses in GALA's resident company. Her particular talent, to my mind, is performing comedy. Whereas there are a few comedic

moments in her performance she plays and older woman who longs for her deceased husband and sees him in the young transplant patient and, at times, his doctor. Millie Marcel, the name of the diva, is consumed in the search for love and meaning as she ages and leaves the opera stage. She finds a strange passion in the artifice of the transplanted heart and the young man who bears it. Strange in the sense that she believes the heart provides the patient with attributes and characteristics of the dead husband that have been transplanted along with the heart muscle and attempts to fall in love with the old/new man.

Again this theatrical device is difficult to swallow. It requires we suspend belief and expect that the female protagonist truly believes the transplanted heart can confer the attributes, character and desires of the donor onto the recipient. Whereas Luz Nicolas is an extraordinarily talented actress, this just seems like a bridge, or a transplant, too far.

However, this is a remarkable piece of writing, a wonderfully sensual set and a capable ensemble cast. It is well worth viewing and should draw an appreciative audience. It performs through March 1st and you should mark it down on your calendar. For tickets and more info, go the www.galatheatre.org.