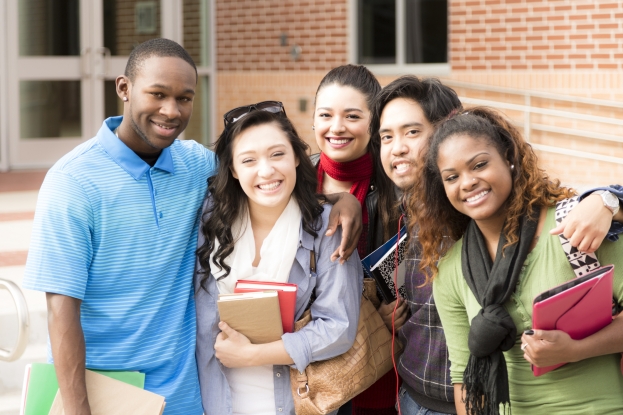 The pandemic is showing us how our healthcare system is failing low-income people and people of color. A report from the office of Rep. Don Beyer, D-VA,  points out that the poor and working poor are most vulnerable to COVID-19 because, “They are much more likely to have underlying health conditions like hypertension, chronic lung disease, diabetes and heart disease. A preliminary study by the Centers for Disease Control (CDC) finds that nearly nine of 10 individuals hospitalized with COVID-19 suffer from such conditions.” It goes on to show that, “Black Americans are twice as likely as White Americans to live in poverty. Partly as a result, they are more likely to contract the virus, be hospitalized for it and die from it.” The report cited a CDC report which found that one-third of people hospitalized with COVID-19 were Black, and Black people have the highest death rates in almost every age category. An MIT study posits that the reasons are not just “because they have higher rates of uninsured, poverty, diabetes, etc.; it must be some other mechanism,” but something more systemic. 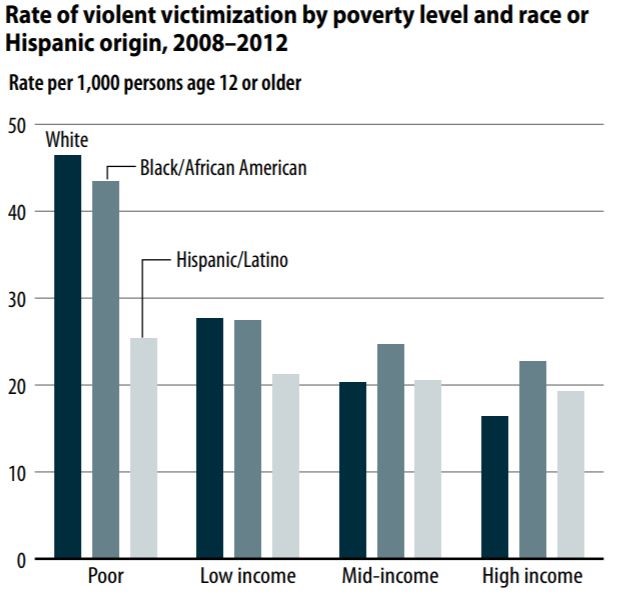 The economic crisis is exacerbating inequality between rich and poor, White and non-White. The current unemployment rate stands at 13.3%, with Black unemployment at 16.8% and Latinx unemployment at 17.6%. A report from Columbia University predicts that as unemployment rises, poverty could climb as high as 17%, with the highest increases for Blacks, Latinx people and children 18 and under. Finally, the justice system continues its long tradition of entangling the poor and people of color. Research shows that crime is an economic phenomenon related to poverty and inequality, not race. In fact, people of color are no more violent than any other group in this country. And yet, Black people are targeted by our justice system at disproportionate rates.

The March Towards Deeper Inequality

The current moment exposes a common thread among these systems: each is built upon the exploitation of people of color and the poor in favor of White people and the rich. Growing inequality and the consolidation of systemic racism are not new. Prosperity Now has written extensively about its causes, from housing discrimination to tax policy. What’s new is the intensity of the health and economic crises we face. The convergence of the two will only serve to hasten our march toward even deeper inequality.

How LMI Youth Are Faring

The protests in reaction to George Floyd’s death were massive, mobilizing hundreds of thousands of people and, at one point, reaching all 50 states. Young people comprised a significant role in these protests, pointing to a unique dynamic that developed recently: young people are increasingly outspoken and energetic about social and economic change, while experiencing increasingly worse outcomes. They face immense challenges, and consistent with overall dynamics, low-income young people and young people of color bear the brunt of the pain.

Before the pandemic, there were 4.3 million disconnected youth, ages 16-24 (sometimes referred to as opportunity youth), meaning they are neither in school nor working. Disconnected youth have high poverty rates, institutionalization rates, teenage pregnancy rates and uninsured rates compared to their connected youth counterparts. What’s more, young people of color are disproportionately disconnected: Native American and Black youth have the first and second highest disconnection rates at 23.4% and 17.4% respectively, compared to 9.2% for young White people. The condition of disconnected youth is a culmination of several factors, including intergenerational poverty, underfunded schools, segregated housing and a school-to-prison pipeline. 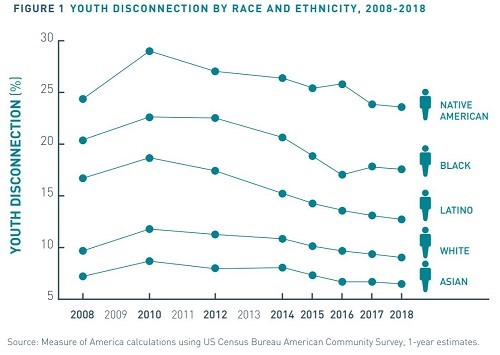 This should come as no surprise: many young people of color already worked in the sectors that were most impacted by stay-at-home orders. About a fourth of people in high-risk industries are young people ages 16 to 24, and many of these jobs were low-wage. In the first quarter of 2020, the median annual wage for people 16 to 24 was $30,500. For Black and Hispanic people, it was $24,000 and $29,000 respectively, compared to $31,000 for White people. If wages for young Black people hold through the end of the year, the amount will be the lowest wage for that group since 2016.

Financial challenges aren’t just limited to disconnected youth. An entire generation of young people could fall behind previous generations. Two economics reporters from the New York Times recently wrote, “A large body of research — along with the experience of those who came of age in the last recession — shows that young people trying to start their careers during an economic crisis are at a lasting disadvantage. Their wages, opportunities and confidence in the workplace may never fully recover.”

Declining wages and dwindling opportunities could increase inequality between young people and every other older group. In 2016, households led by people 35 and under held $11,000 in wealth compared to $60,000 for the next closest age group (35-44) and $264,000 for the wealthiest age group (75 and older).

Youth and the Criminal Justice System

While the overall rate of young people in juvenile facilities has declined over the years, the rates at which young people under 26 are arrested has not. In the last three decades, arrest rates have increased overall, with the largest increases among Whites and women. And young people under age 26 are more likely to be arrested than older Americans. The RAND Corporation finds that arrest rates are associated with “lower probabilities of being married, fewer weeks worked, lower hourly wages and lower family incomes during Americans' adulthood.” Another report reveals that 30% of Black males are arrested by age 18 vs. 22% for White males. This figure grows to 49% by age 23, meaning that virtually one-half of all Black men have been arrested at least once by the time they reach young adulthood vs. approximately 38% of White males.

The current crisis isn’t an aberration. Larry Summers, who served as the Director of the National Economic Council under President Obama, recently said, “I think [the pandemic] is going to mark a fairly profound structural change.” If this is true, then we can’t wait for a return to “normal” before taking action. Young people’s futures are slowly slipping away or worse, their lives are upended as more slip into poverty or find themselves victims of a cruel justice system. We need a systemic approach, including policy and political efforts, to stem the tide of poverty and inequality in the long-term. In the near-term, organizations like those in our Prosperity Network are playing a critical role in the lives of young people. They are taking creative measures to provide their services virtually and ensure the financial stability of the young people in their communities.