What first comes to mind when you consider the new Spanish language theatre piece at GALA, ‘Aunt Julia and the Scriptwriter’, an adaptation of the Mario Vargas Llosa novel, is how courageous and determined Rebecca and Hugo Medrano are about their company. GALA Theatre is the only live theatrical venue open to the public in DC at this time. It’s a tribute to their grit and determination that this show, over a year in abeyance, has finally happened at all!

There is a sheer plexiglass barrier between the stage and the audience (which actually enhances the theatrical effect) and only 50 people seated in the venue which made for a very odd -and depressing- opening night. Everyone masked up to get in. Social distancing and other precautions were taken.

The show, elements of which are autobiographical, is a comedy highlighting the scandalous side of Don Mario, ideal for the moment we live in. Deftly crafted by Director Jose Zayas from the adaptation by Caridad Svich and brilliantly acted by a fine cast of both newcomers and the steady veterans of the GALA ensemble. The entire experience was delightful. Laughter abounded and, despite the distancing and small crowd, there was energy and passion in the audience for the show. It is a complete success.

If you have not witnessed the acting of Carlos Castillo in his many incarnations at GALA over the years, you are in for a treat. His performance as the scriptwriter is classic and expansive. He combines a bit of Charlie Chaplin w/some of ‘Chapulin Colorado’ and, at times, the melancholy gloom of Pierrot the clown. Luz Nicolás continues her brilliant career at GALA with a dual role as Olga & Josefina. Kika Child, who plays the Aunt, is a Colombian actress performing for the first time at GALA. She is memorable and plays the role with the cockiness and starry eyed romanticism needed for the role. All in all the performances were first rate and the show, just the right glimpse of fun and ridiculousness, is needed to take one’s mind off the current world situation. 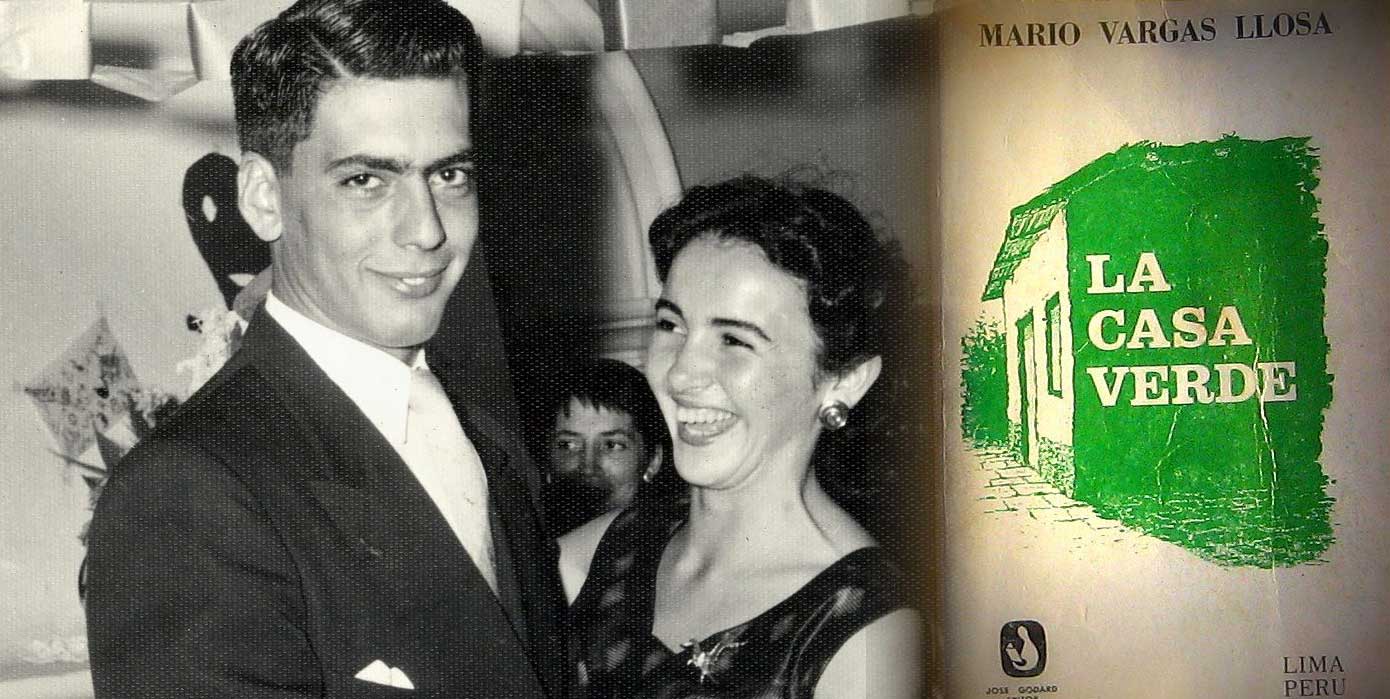 The works of Mario Vargas Llosa have long influenced me, ever since residing in Lima at a young age. I was first exposed to his early works, The Green House (“La Casa Verde”) and Conversation in the Cathedral (“Conversación en la Catedral”) during my university years. Later, upon returning to the United States and marrying a Peruvian, I would read the novel, Aunt Julia and the Scriptwriter (“Tia Julia y el Escribidor”), the stage adaptation of which is now at GALA Theatre live through May 9th.

A prolific raconteur to this day, with an extensive portfolio of works ranging from novels, plays, essays to political commentaries in numerous publications worldwide, Mr Vargas Llosa has been an iconic public and literary figure in Peru for generations. He is the pride of Peruvian letters and the scourge of the left, having run for President and lost. Subsequent to that defeat he wrote what is for me one of his finest works, The Feast of the Goat (“La Fiesta del Chivo”). The book is the story of the last months of the Trujillo regime in Dominican Republic and the horrors of authoritarian dictatorship. It was written, one would assume, to exorcise his electoral defeat and excoriate the lawlessness and immorality of authoritarianism.

The first time I met him was in the late 70’s when he was in Washington DC as a visiting scholar. I have been in his presence perhaps half a dozen times since then. The first meeting he gave a speech at MLK Library invited by the great Elena Tscherny who was the Hispanic librarian there at the time. He was introduced by our then community leader Carlos Rosario who, I kid you not, mispronounced his name 5 different ways. Vargas Llosa wasn’t as famous then as he is now.

But the most remarkable meeting, the one I was reminded of when attending the GALA opening, was when I met him in 1986 at an off Broadway theatre in New York City for the premier performance of his play, “La Chunga”. I 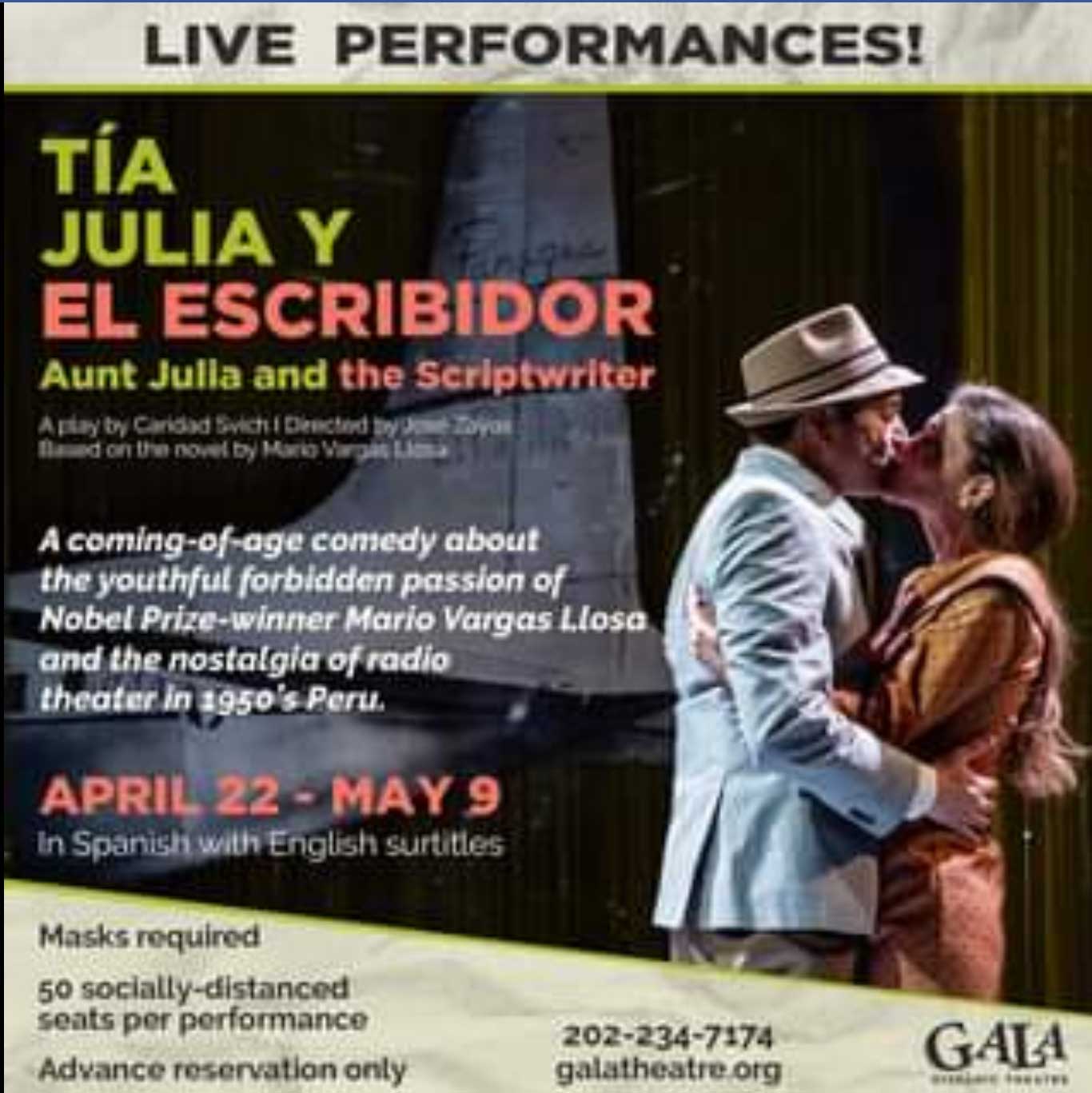 had heard of the piece and was stunned when I glanced across the aisle and saw Don Mario seated next to me. “La Chunga” takes place in a brothel in Ica, Peru and chronicles the experiences of a prostitute who works there. Surprised that Mario Vargas Llosa was seated across the aisle from me, I paid my respects before the curtain went up and lightly spoke of my admiration for his work. This was before the show started. To this day, I have never been to a performance piece as vulgar, shocking and sexual as that play. I was so surprised by the content that at the end of the show all I could do was blush. But I will never forget the pride and joy on Mario’s face. I am reminded of that look because Pablo Andrade, the actor who performs Mario in the play, captures it perfectly when his conquest of Aunt Julia is complete. It is the look of a mischievous, misbehaved child who has achieved his goal. The self satisfied impish grin on someone who has put something over on you, someone who has done something you would never expect.

I cherish the experiences I’ve had with the great Peruvian author throughout my lifetime and pleased to renew my love for live theatre by attending the GALA performance.

Please support the beauty and magic of GALA Theatre by attending and/or contributing. Congrats to the Medrano’s for another grand illusion!