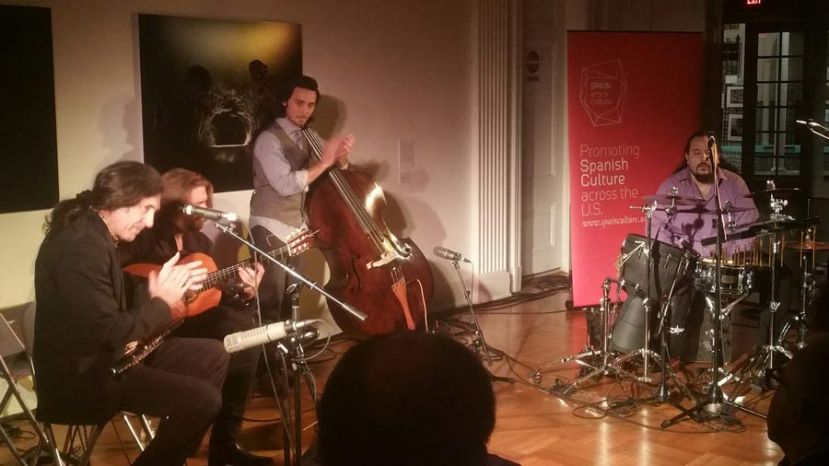 Much later, August 29, 2015 to be precise, I would coincide with Jorge Pardo in Pamplona at the new state of the art Baluarte Auditorium. That night his show included my friend Jerry Gonzalez on trumpet and conga and the fiery Cuban piano player nicknamed 'Caramelo'. Rycardo Moreno was on electric guitar, Antonio Serrano, harmonica and 'Piraña', another Cuban on percussion. All of this was wrapped tightly around the bass of Javier Colina, perhaps Spain's greatest jazz bassist, who rounded out the group. It was a fabulous, magical evening in a beautiful, modern space. On that occasion the idiom was a mixture of Spanish jazz and Caribbean rhythms, a sort of salsa rendition of the now classic jazz/flamenco fusion. Jorge Pardo is a versatile artist and musician who thrives in the realms of jazz, flamenco and Latin rhythms and composes fortuitous musical adventures for his audiences.

On Thursday, November 17th 2016, in the intimate setting of the "Former Residence of the Ambassadors of Spain" before a sold out crowd of roughly 100 patrons, Jorge Pardo showed off another, different side of his talent. He opened the evening with a soft, lilting flute solo with elements of Manuel de Falla's Nights in the Gardens of Spain and Ravel's Bolero and continued it with the fine flamenco guitar of 'Juanito' Pascual and his trio. The most interesting wrinkle of the night was Jose Moreno on percussion, in particular the 'cajon'. The 'cajon' is literally a box the musician sits on and pounds with his hands. Although it was first used in the Afro-Peruvian music native to that country over the past 50 years, as Moreno was to confirm to this writer, it has been used increasingly in flamenco shows or 'faenas'.

The evening was tinged with interesting flights of fancy, from hard flamenco 'Bulerias' and 'Tangos' led by Juanito on the guitar to a swinging rendition of the classic Adalberto Santiago romantic ballad; 'Ya No Estas a mi Lado Corazon' that had the audience singing along with the first verses.

Spain/Culture.us is producing more and more interesting spectacles and activities with a wide range of artists and cultural figures who would not otherwise be presented here. Add their website to your favorite places and see what this vanguard cultural project has to offer.