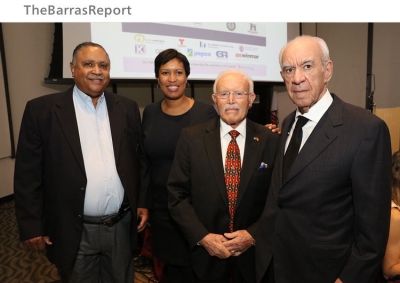 Off the beaten path, hidden from most uninformed citizens deep in Ward 5 in Northeast Washington, D.C., is one of the region’s business behemoth. Some people have referred to Fort Myer Construction Corporation as an icon. Its story is a version of “The Little Engine That Could.” Co-founders and partners, Jose Rodriguez and Lewis Shrensky, bootstrap a small concrete company that initially had no administrative offices or staff, into a corporation with an annual income of more than $250 million and a payroll of nearly 900 workers, the majority of whom are minorities.

DC government officials—past and present—have praised the organization and its work. Terry Bellamy, a former director of the DC Department of Transportation, once asserted that he relied on Fort Myer “not because of any relationship” between the agency and the business. Rather, Fort Myer “always gets the [work] done.”

Accolades also have been offered by several nonprofit organizations, including the Southeast tennis and Learning Center, Esther Productions, Inc. and the FBI Citizens Academy Alumni Association of Washington D.C., for which Rodriguez created a trust and has helped raise millions of dollars to serve inner-city youth. Local contractors, like Renee Holmes, president and CEO of Hybrid Construction and Engineering Group, also have applauded Fort Myer.

“The company as a whole has been my savior,” said Holmes a civil engineer and one of the few African-American women involved in utility and electrical contracting. She said she is looking forward to the “Diversity in Construction Reception” on October 18, 2017 where one half of the duo—Rodriguez--is expected to be honored. “When I think of the word legacy that’s Fort Myer,” added Holmes.

Fort Myer’s reputation isn’t the result of some slick media or propaganda campaign. It is the result of the owner and its employees’ hard work, dependability, and indisputable commitment to the Washington-Metropolitan region, which began back in the early 1970s. That’s when Shrensky and Rodriguez came together to realize a dream.

The later was a supervisor for a paving contractor; the former had just come out of the army and set up a small private law practice. They met when Rodriguez went to Shrensky to help Rodriguez set up a business that would focus mostly on home improvements. They envisioned a company that paved patios and pool decks.

“Our first contract came before we even had the company set up. It was to build a small concrete wall. We decided to charge $1200,” remembered Shrensky during a recent interview at the company’s headquarters on 33rd Street NE. The duo had to ask to be paid up front since the concrete was to come COD. By the time they covered their costs for the job, they had a mere $400 left.

“That $400 is the entire capitalization of everything Ft. Myer,” said Shrensky. (Rodriguez also was expected to sit for the interview but was called away when a family member became ill and was taken to the hospital.)

“We never took money out of the business,” continued Shrensky, adding that they plowed the earnings back into the company to keep growing it.

During its first early years, the work was hard and neither man gave up his day job. At one point they took out an ad that read in part “patio and driveways by European craftsmen. All work guaranteed.” Not unlike now, their work was high quality and they made friends.

Their first client allowed them to take the name of an apartment building he owned—Fort Myer Heights Apartment, which was never the Fort Myer military base. Rodriguez and Shrensky called their new business Fort Myer Concrete Company. When someone called the apartment complex looking for them, the receptionist took a telephone number.

By 1974 Ft Myer Construction was formed, after Shrensky took a walk one day. Then, the Metro was under construction. There were holes all over the place: in the streets, the sidewalks. Shrensky said he asked one of the guys who was going to fill those holes. Before long, they had the work. “We were good sales men,” he continued, adding that Jose whom everyone calls Joe “could sell fish.” Within two years their nonunion shop, became a union operation, which it remains to this day.

The company has given birth to at least a half dozen companies, many of them minority own. Every last Wednesday of the month Shrensky meets with its Small Business Round Table, the brainchild of Evelyn C. Ross, who is also its director. “There is no fee and no application. All you need to do is show up. We’re doing something a lot of big construction companies have not and are not doing,” she said.

“I learned not only about the business but also about myself,” said Holmes, adding that Shrensky “comes to every round table.”

The company has from has time to time made the news headlines because of bad behavior by one of its employees or workers. Occasionally, various people have claimed it has undue influence over elected officials or agency managers. “Every company has a few bad people. At the end of the day Fort Myer taught me as a woman. I have only good things to say.

“All the younger folks look to them, to the Fort Myer model,” added Holmes.

According to the Alliance, Roubin has worked on such “epochal projects” as the 14th St. Bridge and the Kennedy Tomb at Arlington National Cemetery, employing local stonemasons and creating an entire construction sector dedicated to brick and stone masonry, paving and roofing. Jones has served as a leader in empowering African American construction firms in the complex field of laying concrete, foundation construction and demolitions.

Rodriguez through Fort Myer has been involved with the development of every major monument since their founding, said Shrensky. The company helped build the Viet Nam Memorial; the memorial to the 56 signers of the Declaration of Independence, the John Marshall Park, and were subcontractors on the Memorial for the Rev. Dr. Martin Luther King, Jr.

Jose Sueiro, director of the Metro DC Hispanic Contractors Association and a key organizer of the awards program, said the award recipients “best exemplify companies for whom diversity is an important and all encompassing goal.” In 2016, the Alliance honored Turner Construction Company, general contractor and president of Dynamic Concepts Inc. Pedro Alfonso and developer Jair Lynch with JKL Real Estate Partners.

In addition to its awards’ program, Sueiro noted his group also is working with Carlos Rosario Public Charter School and Turner Construction to help develop more Hispanic contractors. The first group included as many as 50 individuals who received certificates. The next step will be to help them win bids.

Stanley Jackson, the brainchild behind the Alliance and the head of the Anacostia Economic Development Corporation, saluted now deceased former mayor and DC Council member Marion Barry for establishing the minority set aside program that paved the way for many of the individuals and companies that have been honored thus far. Things in the industry have become far more competitive, however. Jackson said when he created the Alliance he saw an “opportunity for people to step back and look at the narrative a little differently.”

Everyone was complaining they weren’t getting their fair share of contacts; most of them were minority contractors. It was a “race to the bottom. All of us were under bidding each other,” continued Jackson. That dynamic has to change. “As things move forward the issue has to become not just creating more minority businesses. The issue has to become sustainability of minority businesses.”

Fort Myer is a lesson is creation, diversity and sustainability. Shrensky credited three things for the company’s success: Barry’s set aside program. “The entire community got lifted by these programs.” Shrensky and Rodriguez “always listened to their bonding company.” It also wasn’t afraid to take risks, seizing an opportunity when it saw one.

“We were curb and gutter and sidewalk contractors. We made a gutsy move that grew our capital,” continued Shrensky. “We bought an asphalt plant. We started with Roger Blunt and added two more.” Now every year Fort Myer purchases 450,000 tons of asphalt. (See what I mean about behemoth)

The duo isn't worried about being eclipsed by any of their round table mentees or subcontractors. “The mountain is pretty high. We’ve built such a machine today after 45 years and we’re not standing still.” They have created a utility and electrical division. Smart cities have become part of their lingo and business portfolio.

While Rodriguez is the one receiving the prestigious Alliance award, Fort Myer has never been a one-man operation. “It’s been a marriage of 45 years and we haven’t disagreed on anything. There’s never been a harsh word between us.”

That harmony has produced one of the city’s finest corporate citizens--one that continues to benefit the District and its residents.