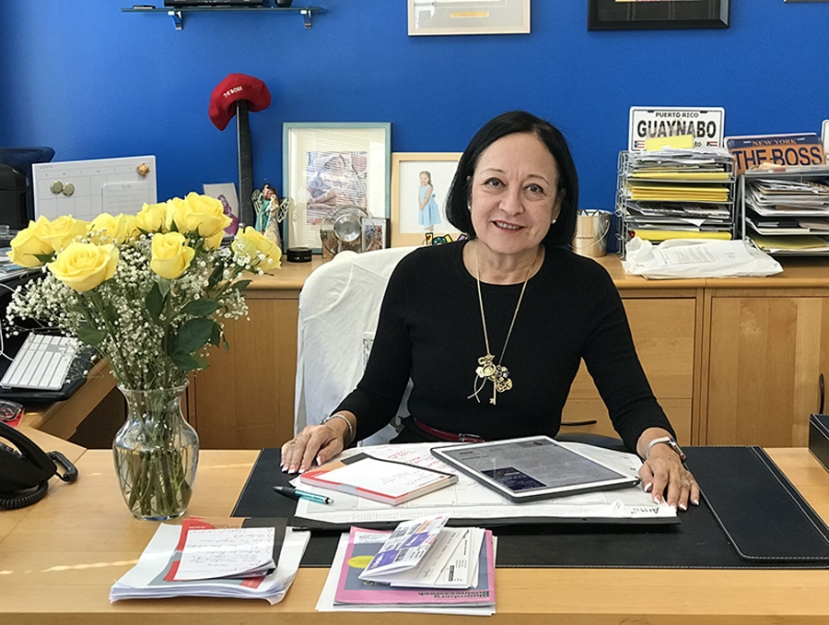 Seated at her favorite table at ‘La Taberna del Alabardero’ restaurant in Washington DC, it is with great relish that Gloria Rodriguez tells the story of her 5 minute interview with Ronald Reagan, a seminal moment in the hugely successful career of this pioneering figure in the world of national Hispanic media, communications and public affairs. It happened in Tampa in the mid 80’s on a trip the President was making to address the United States Hispanic Chamber of Commerce. In her inimitable and courageous manner she found herself waiting for the President to exit his limousine and then corralled him directly to ask for support for the National Puerto Rican Forum which had seen it’s federal funding drastically reduced, ironically enough, by his administration.

It was the first time they met. The money for the PRF was quickly restored and Ms. Rodriguez had her first big time client… and so begins Comunicad, the public relations firm she founded and has led since 1987 that’s now flourished into a multi-million dollar powerhouse in the nation’s capital.

Around DC Gloria is a familiar personality. She was lured to Washington by the legendary news anchor and producer, Maureen Bunyan, who saw her work on a visit to Puerto Rico. She has cultivated the world of corporate giving for over a generation through her company and has established business relationships with a wide panoply of corporate officials, national Latino leaders, government personalities

and the non-profit world. Of course her Puerto Rican Heritage and sophisticated charm are what distinguishes her and when you catch her laughter in a room or hear her speak you are immediately captivated.

A partial list of distinguished corporate clients over the years reads like a who’s who of companies who value diversity in the marketplace; Ford Motor Co., Coors Beer, Coca & Pepsi Cola, AARP, Texaco, Exxon, etc., and in particular the telecoms. The hay day of Comunicad was during the breakup of the Bell companies and the dawn of the internet world from 1992 to 2005. Comunicad was a leader in the development of legislation and advocacy for inclusion of Latino players in the field.

It was during that period that the company came into its own and Gloria Rodriguez became an influential business woman on a national scale. At the time she was able to develop a public relations firm with a social conscious and frame the concept that Hispanics ‘make a difference’ and that attention to multi-cultural communities was the future. She was involved with the creation and early development of HACR (Hispanic Association for Corporate Responsibility) and crafted corporate social responsibility campaigns as a public affairs strategy (see Ford Motor Co. in particular).

Gloria helped organize the National Hispana Leadership Institute (NHLI) where she met Clara Padilla Andrews, President of the NAHP. Ms. Rodriguez was an early supporter of the Hispanic press in the 90’s and lobbied corporations to make investments and purchase advertising in Spanish language publications. Her value to the NAHP was the advice she gave nascent publishers and how she paved the way for many of them to approach corporations for support. She recounts the times she consulted with NAHP Presidents such as Zeke Montes and Eddie Escobedo on how to garner a higher profile with corporations for the organization. When NAHP needed access or input she was there. Gloria has been instrumental in persuading corporations to invest in Hispanic press.

It has been some years since Comunicad has collaborated with the NAHP, but Gloria still espouses the values, lessons she’s learned and the strategies needed to reach out and penetrate corporate barriers. The message she brings with her to the 37th Annual NAHP Convention this year in Las Vegas suggests that what corporations are looking for are publications with a major internet presence, the strength to sponsor and produce local social and promotional events and how they can mobilize communities behind key issues -one of the major strengths of our member publishers.

Comunicad has become more than just a PR firm. It strives for a legacy as a company that influenced its clients to develop policies that highlight corporate social responsibility policies and stand behind greater direct outreach to diverse communities. They now specialize in campaigns that bring companies closer to the people. Currently they are involved in reconstruction projects in Puerto Rico and campaigns to ameliorate poverty in Central America.

Gloria Rodriguez remains a visionary leader who has provided a valuable service to communities of color in our country. She fills a vital need and a unique niche in the public dialogue in the service of providing opportunities, empowerment and prosperity to minorities, women owned businesses and entrepreneurs. She is the very definition of the ‘wise Latina’, a tribute to the progress and success of our ‘Raza’ and a very real embodiment of the American Dream…

More in this category: « NAHP Hires Jose Sueiro as Executive Director The Wizard from Walla Walla; A lifetime defending the Latino Press »