It also deserved more of Alex Alburqueque. Another home grown, masterful opera baritone talent, the Peruvian singing sensation performed as the comic counter to the leading man and, during parts of the performance, played the farcical role of a young boy. Perplexing directorial choices with such an accomplished performer. I spent the evening hoping we would hear him sing and yet he had no solo parts and his singing as part of the group was minimal. Among the many features of a Zarzuela are roles assigned to children who strut out in costumes and sing songs while the audience applauds these cute interludes. Alburqueque’s interventions as the child did not have the same effect. 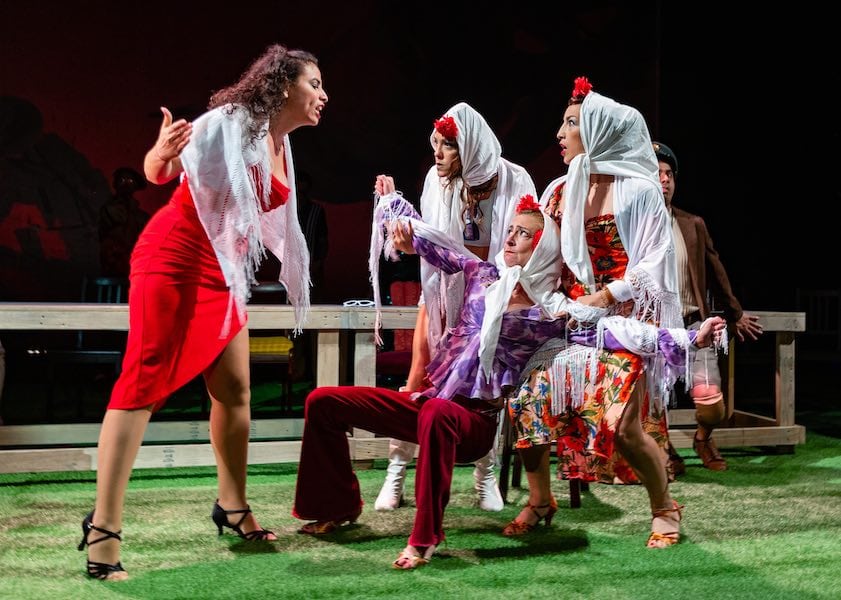 Laura Virella, out of New York making her GALA debut in the role of Mari Pepa was a spectacular leading lady. Her singing was impeccable, lush and thrilling. She thread the needle between intelligent, liberated woman and sensuous, sexy broad as best she could. However, it was distracting from the purported purpose of the show to have her showcase her curvaceous shapes in a revealing dress, spread her legs out on the table and perform as if she were the neighborhood tramp while at the same time citing the philosopher Foucault and entering into philosophical discussions with her neighbors. Perhaps in 1897 a liberated woman would’ve been portrayed as a kind of slut, but in this modernized version it would have been more interesting (and attractive) if the allure had not been so overplayed and the liberation more accented.

The show is charming, the production values –as usual over the past few years at GALA- unique and superbly done, but some of the production choices left me dissatisfied.

Of all of the possible Zarzuelas to produce in Washington D.C. in 2022 why this one? ‘La Revoltosa’ is a relatively minor example of the genre. There are many others better suited for today’s world. Zarzuela’s are light, airy, musical farces with lots of singing and costumes. In order to make this a modern production the drab costumes were those of a typical neighborhood, the singing reduced to bare essentials and the plot cluttered with serious asides that seemed incongruous to the story line.

Nevertheless, I had a great deal of fun attending the GALA show. Pulling together a musical theatre piece in Spanish in Washington is not a usual experience. It is worth it to experience regardless of this critic’s knit picking! Go see for yourself before it closes on October 2nd.

RT @Ty___Webb: Hey remember when all those big bankers who caused the 2008 financial collapse went to prison for defrauding the American pe…

RT @davenewworld_2: An oil operator from Kentucky pleaded guilty to discharging about 4,000 gallons of oil into a body of water that leads…

RT @BeschlossDC: In today's Profile in Courage, Hawley says that he supposes Trump "can have dinner with whomever he wants to."

RT @robreiner: Don’t know why everyone is so bent out of shape. All Donald Trump did was have dinner with some “very fine people.”

RT @Murp1953Tim: May Jack Smith be her worst nightmare. https://t.co/y4cEWDRwyQ