This summer I'm making a trip to Spain with a few select friends. I'm calling it my Spanish 'dream' journey and invite those of you interested to come along. Let me share the highlights with you.

The trip is planned for August 14th thru 28th, precisely 14 days and 13 nights. The journey starts with 6 nights in Galicia, on the rugged northwestern coast of Spain above Portugal with the best seafood in the world, a breathtaking coastline and dozens of beautiful beaches with cold, rich waters that chill the body and refresh the soul! 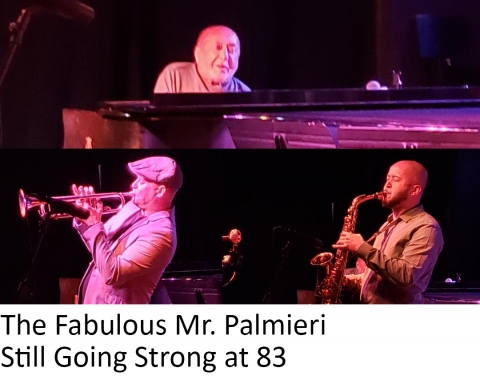 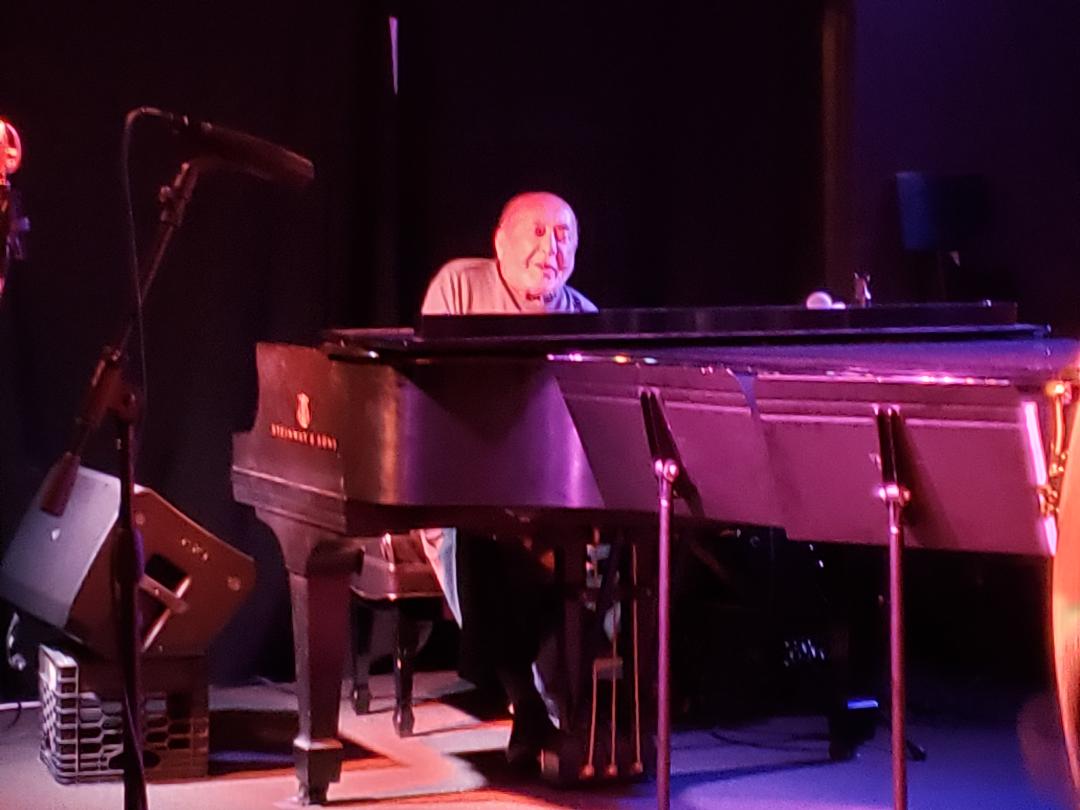 Just a couple of weeks ago, on Sunday, December 9th, I was able to attend a jazz concert in Baltimore at the new Keystone Corner Jazz Club and listen to the incomparable Eddie Palmieri and his Jazz Sextet. It happened to be the day of Eddie's 83 birthday and he was in fine spirits and even better form. We celebrated together backstage since my good friend, Rene Lopez, a close Eddie friend for more than 40 years, had come down from NYC to attend the concert as well.
Eddie Palmieri is the last remaining great salsa and Latin Jazz planer of the golden era of New York salsa. Gone is his brother Charlie Palmieri, Machito, Tito Rodriguez, Tito Puente and Celia Cruz, all great musicians who lit up the salsa scene from New York City from the early 50's through the new century. Palmieri remains a working musician who tours with his Sextet. He also performs with his big band salsa orchestra when the occasion permits and continues to travel the world (he is booked here in DC in June of 2020). 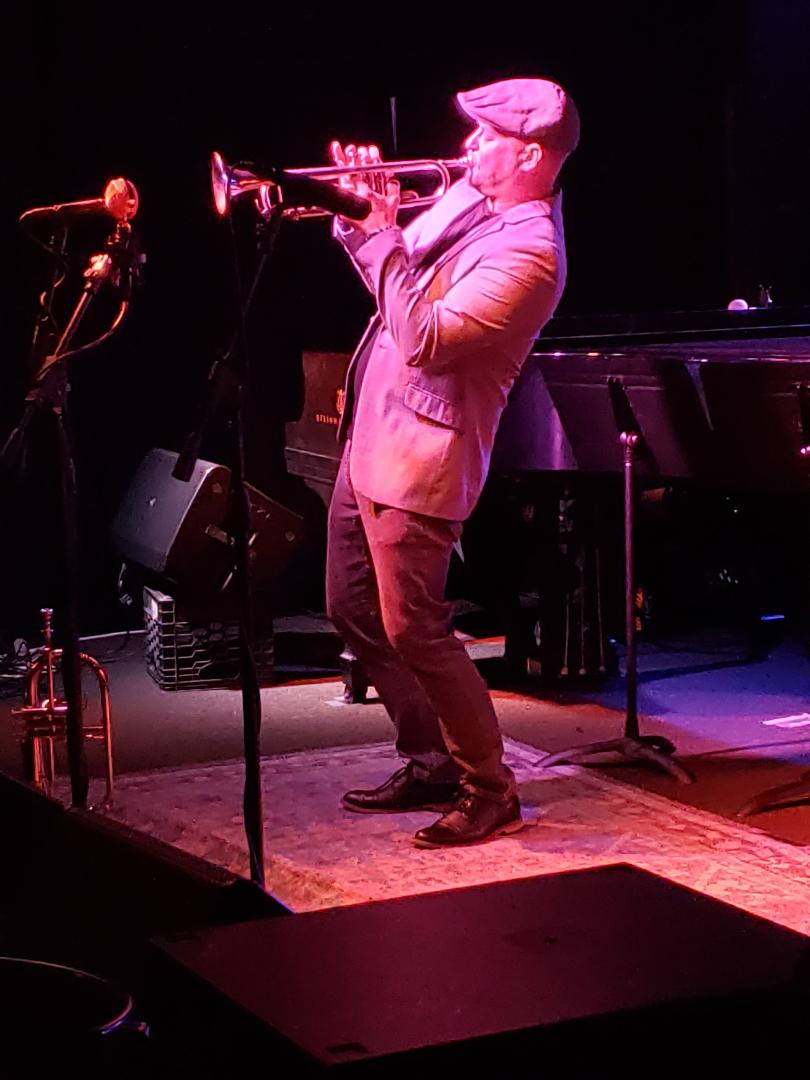 He has surrounded himself with a tight, highly skilled group that includes the gifted trumpet player Jonathan Powell and saxophonist Luis Fouché, he of Late Show with Colbert fame. His percussionists are always famous top of the line guys (Jerry Rivero and Luisito Quintero in this case) and his offerings mostly self compositions. He began the evening with a jazz version of 'Adoracion', one of his most classic tunes and extended into a piano solo riff that all of us who know the tune and follow his music could understand and relate to. The group played everything from bossa nova to Cal Tjader and Thelonious Monk.

It was my second visit to the Keystone Corner Club (both times to see Eddie) and we were very pleased to see a thriving new jazz club down in the new neighborhood of Baltimore they call Harbor East. Palmieri is one of those 'swinging' music legends like Tony Bennett or Willie Nelson who just dazzles the public with his virtuosity, joy and sense of humor eon stage.
Eddie recently put out an album with Gilberto Santarosa and Carlos Santana. Still going strong, with a fabulous sense of humor and strong chops, it's a wonder to just watch him play. Generations of Puerto Ricans were influenced by his recordings such as; 'Muñeca', 'Vamonos P'al Monte', 'Nada de Ti', 'Oyelo que te Conviene' and many, many more. Music that has defined our times as Latinos living in the U.S. 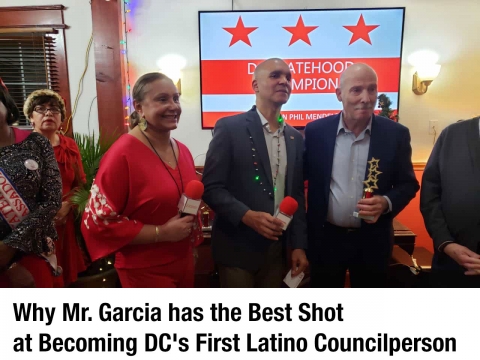 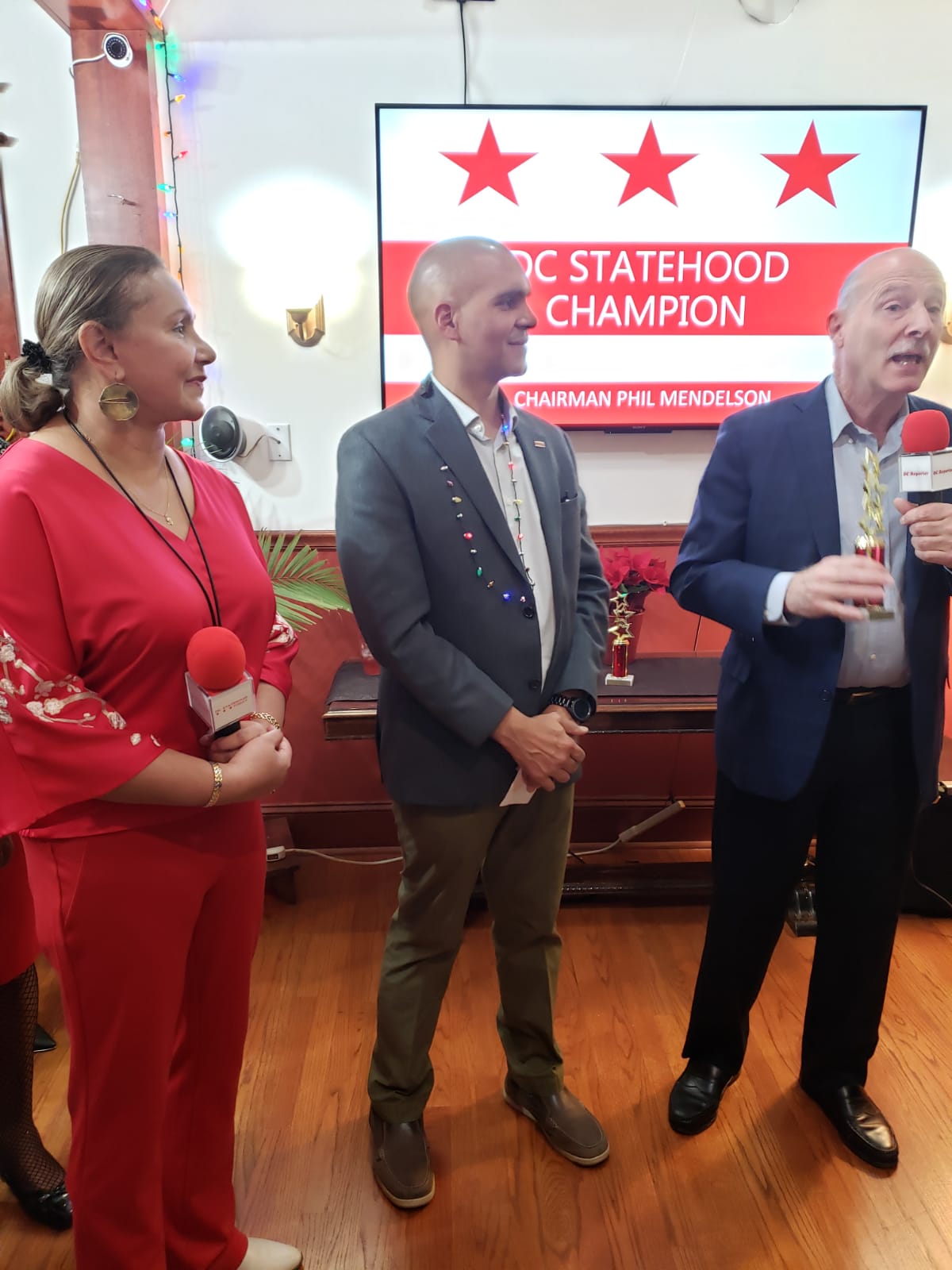 During that time Franklin was the glue that held us together. We met Saturdays at what was then EOFULA (Vida Center today). Franklin called us to order, organized the documents and later would request government officials visit to discuss our research. I remember Dan Tangerlini showed up one Saturday morning when he became City Administrator, as did the head of the Housing Authority, Councilman Graham and various agency heads. At the time Franklin also created the DC Latino Caucus. He was quite active even then.
Subsequently, he went on to work with the DC Democratic State Committee. He became their Communications Director at one point and worked closely with Chairperson Anita Bonds, David Meadows, Phil Pannell and other Democratic Party activists. He ran successfully for the DC DSC on various occasions and was responsible for numerous initiatives including a modern newsletter and wide distribution of videotaped hearings and meetings.
Franklin made himself central and indispensable to the local party leadership and became a political figure himself. He first ran District wide for public office approximately 5 years ago. He won the election for Shadow U.S. Representative with over 110,00 votes. In fact, he has won the position in 2 subsequent elections ever since. Even running unopposed or with limited opposition, this is no easy feat. It means that over the last 3 elections more than 350 thousand voters have pulled a lever or punched a card with Mr. Garcia's name on it. If he can translate that into votes in a Council run he's golden. Franklin would have to win somewhere above 60,000 votes to win the At-Large Council seat. He's running for the seat now held by David Grosso who is retiring. This is the one seat on the Council reserved for non-Democrats. Garcia will have to resign from the Democratic party to run. 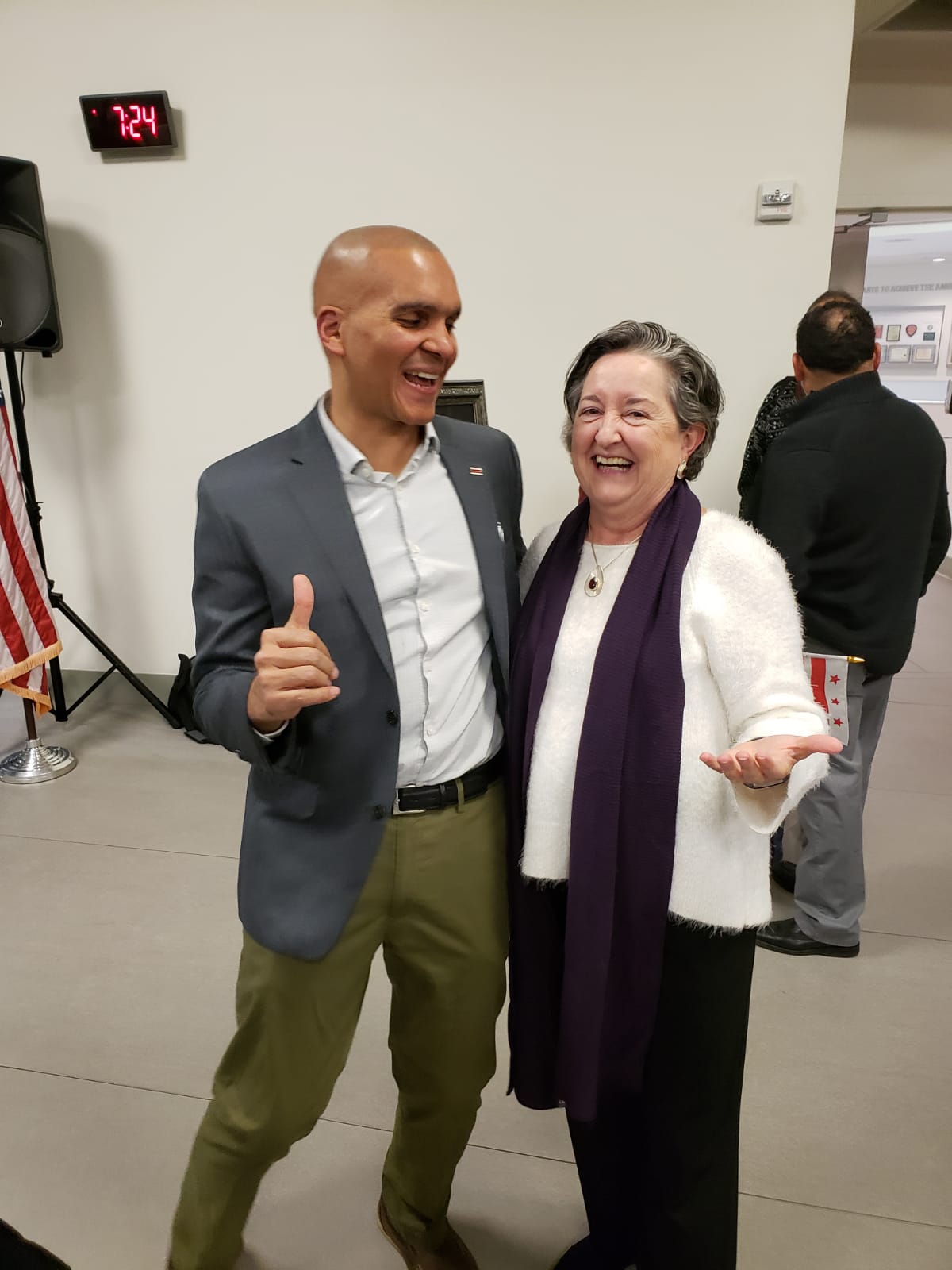 Franklin is a master about town. Rarely a night goes by when he is not at some civic meeting or attending a public activity related to statehood politics or District affairs. His life is dedicated to public service. He carries a miniature DC flag in his pocket wherever he goes. When he takes a picture or appears in a video, he pulls it out of his pocket and waves it at the camera. He is not only active, but knowledgeable. He can gauge his audience instinctively and deliver excellent remarks no matter what the scenario, who is in the audience or where he is in town. He's a master at the public arts. He also has integrity wrapped in a cautious, measured attitude. He's an honorable man of his word.
Franklin straddles both the Latinx as well as the African American community. He is likeable, knowledgeable and helpful. For this article we took a photograph at Franklin's recent holiday celebration at his home. In attendance were Rep. Eleanor Holmes Norton, Phil Mendelsohn, Shadow Sen. Brown, Silvia Martinez from the DNC, diplomats, professors and videographers, residents young and old from the African American, Latino and white communities, a broad cross section of this town.
No one in our memory has been this engaged, this prepared and this ready to accede to a position of authority and power on the DC Council and in the life of the District as Franklin Garcia. We wish him well and promise to support him throughout. As they say in the movies; 'May the force be with you!!" 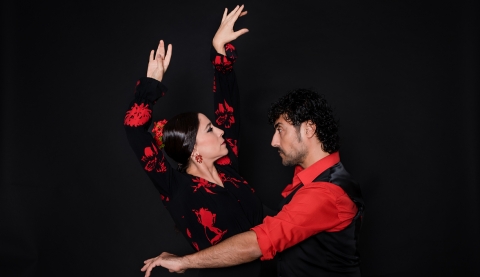 RT @JoeBiden: Losing a loved one is incredibly difficult, but it’s even harder when you’re not able to be with them in their final moments…

RT @PalmerReport: Imagine being so deranged that when you look at what’s happening right now, you think the best thing you can do to help A…

RT @ericgarland: TWO DAYS AFTER THE IMPEACHMENT VOTE, AFTER BEING BRIEFED ON THE CORONAVIRUS, TRUMP HAD 17.8 TONS OF HOSPITAL PROTECTIVE GE…

RT @neeratanden: This is outrageous.

RT @SenKamalaHarris: At least 35 health care workers in California have tested positive for COVID-19. Trump must use the full force of the…

RT @joncoopertweets: More Americans now disapprove than approve of Trump’s handling of the coronavirus pandemic for the first time in Navig…