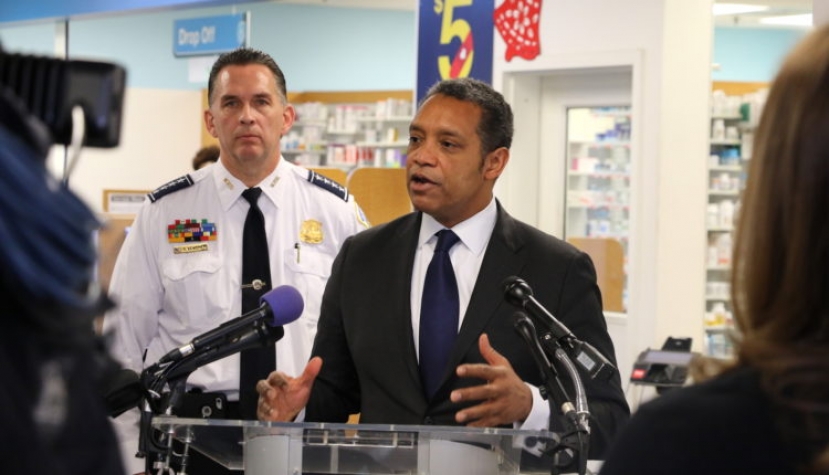 Perhaps we should have recognized much earlier the large ambitions of Karl Racine. After all, he had been a White House counsel and was one of the first African Americans elected as managing partner of Venable LLP, a top firm in the city. He also spent more than $225,000 of his own money in his quest to become DC’s first elected, independent attorney general.

For much of the past five years, Racine has been praised, including by me, for strengthening the Office of the Attorney General (OAG). He created the Office of Consumer Protection and a Public Advocacy Division, aggressively fighting slum landlords and other predators. As president-elect of the National Association of Attorneys General and chair emeritus of the Democratic Attorneys General Association, he has worked with counterparts across the country to fight President Donald Trump’s discriminatory policies, his violations of the Constitution and his insatiable greed.

Still, Racine’s shine may be fading. Increasingly, some people, including advocates, civic leaders and government employees, are questioning his actions and motives. For example, they wonder about his seemingly growing appetite for executive branch territory like the Office of Human Rights. They also have frowned upon his foray into DC Council politics.

In the June Democratic primary, Racine has endorsed Brooke Pinto for the Ward 2 council seat and Janeese Lewis George, who is running against Ward 4 incumbent Brandon Todd. Racine also jumped out early for independent candidate Ed Lazere, who is vying for the at-large post reserved for a non-Democrat in the November general election. Racine announced that choice before Lazere or anyone else has even qualified for the ballot.

“Is he empire-building?” asked a senior-level government official who requested anonymity.

Racine has become a big-game hunter.

When U.S. Sen. Kamala Harris was a Democratic presidential primary candidate, he cast his lot with her, dreaming that her victory might catapult him to leadership of the U.S. Department of Justice. Now, he’s supporting Joe Biden. Racine’s eyes are still on the prize, however.

In March, The Washington Post reported Racine filed for a third term as the District’s AG. That same day, however, he had this to say during an appearance on WAMU-FM’s Kojo Nnamdi Show: “I am not foreclosing going into the federal administration, if there’s a job that’s an important job that can advance the United States.”

If he wants to be U.S. attorney general — and I think he does — he has to demonstrate a broad reach and diverse skills; operating an AG’s office that mimics those in other states and exercising leadership in the national associations are critical. If Racine doesn’t land the federal appointment, there’s always DC to come home to, which is why he’s playing local politics.

Those comments — veiled references to DC Mayor Muriel Bowser, whose political organization has been called “The Green Team” — exposed where Racine sees his local political competition. He offered no apology, however.

Pinto and George each served as an assistant attorney general in Racine’s office.

“Damn right I am supporting Brooke Pinto. She is tough, and hard as nails,” he said. Last week the Post endorsed Pinto in the crowded Ward 2 race. This week Mendelson endorsed Patrick Kennedy. Former at-large Council member Carol Schwartz has announced her support for John Fanning.

“Janeese is far left. She has been presented as being this wacko liberal, [but] she is evidence-based and a strong criminal justice advocate,” Racine said of his Ward 4 endorsee. The perception of George’s political leanings has come from her self-identification as a “Democratic Socialist.”

Racine said stepping behind Lazere was harder although “I think he is immensely qualified. I think we need a Latinx, like [Franklin] Garcia or Monica Palacio,” two of the other prospective candidates running for the at-large seat in November.

“My analysis was that Ed checked more boxes. He also has a pathway to victory,” Racine added, noting that Lazere garnered a significant number of votes in his 2018 campaign to unseat Mendelson.

Racine has already telegraphed his support for Ward 8 Council member Trayon White and at-large Council member Robert White, both of whom, like Pinto and George, previously worked in the OAG. If his candidates win, Racine will hold a chit with at least five members of the 13-person legislature.

“I am not looking to curry favor nor am I afraid to share my views,” he said.

That isn’t the point. Shouldn’t the AG be an honest broker? Shouldn’t he move above the political fray, especially when he is expected to do the legal bidding for the executive and legislative branches as well as all the citizens in the District?

Racine’s behavior has made him susceptible to allegations of empire-building. It doesn’t help that he has gobbled a portion of the Office of Human Rights’ portfolio to create a Civil Rights Section within the OAG. Opportunistically, he used supplemental COVID-19 emergency legislation, approved last month by the council, to continue the gorging, allowing him to prosecute more cases under the Human Rights Act.

In that same law, Racine secured approval of a “Funeral Bill of Rights,” which had been part of his legislative proposal that had languished in a council committee since January 2019; wasting no time, he released details of the “Consumer Bill of Rights for Funeral Home Establishments” on Wednesday.

And, when it comes to preventing utility disconnections, that job will go to Racine — not the Office of the People’s Counsel, which by law serves as a legal representative and advocate for utility customers.

Recently, he announced the creation of a Public Corruption Section, hoping to enhance the criminal prosecutorial authority of his office. The new office could clash with the U.S. Attorney’s Office for the District of Columbia, the Office of the DC Inspector General and the DC Board of Ethics and Government Accountability.

“The success of those entities at being a deterrent has been mixed,” Racine told me. “There is a need for a prosecutor to [deal with] pay-to-play, campaign finance. There is no better entity than the local prosecutor” to handle that task.

He has accused federal officials of not being interested in public corruption cases or other crimes like campaign finance or financial disclosure violations or even false claims, which is a form of fraud where an individual or company deliberately misrepresents the value of a product or services that may have been delivered to the government. Ironically, under former U.S. Attorney Ronald Machen Jr. and his deputy Vincent Cohen Jr. there was a strong anti-corruption focus, including felony cases against various council members and campaign violations against members of the 2010 mayoral campaign of Vincent Gray. Gray was never charged with any wrongdoing.

As a private attorney, Racine represented one of the individuals charged in an unrelated felony: former Ward 5 Council member Harry Thomas Jr., who took for his personal use tens of thousands of dollars that were supposed to be spent on disadvantaged youth. Doesn’t that make Racine’s emphasis on prosecuting public corruption more than a bit hypocritical?

Neither the AG’s ambitions nor his opportunism has been sufficiently exposed. Sometimes, in politics, memories are far too short.

Unquestionably, DC should have the ability to prosecute crimes, as every other state does. But, is Racine’s snatch and grab method the best approach for achieving that goal?

A serious examination of his territorial expansion — including his recent hiring of Jonathan Kravis to help develop the public corruption unit — has not taken place. Kravis had been deputy chief of the Fraud and Public Corruption Section in the U.S. Attorney’s Office; he oversaw the prosecution of Roger Stone for obstruction of Congress and related offenses. Kravis resigned over the U.S. Department of Justice’s handling of the Stone sentencing.

Racine said Kravis, hired under a $58,000 three-month contract, has been asked to explore “what is prosecutable and to see what legislation we might need, see how we might organize ourselves, see how not to be in a conflict situation with cases.”

Nevertheless, Kravis told me that establishing the Public Corruption Section is a “worthwhile project.” He said he has been speaking with attorneys general in other states to better understand how to set up the division and create more cooperative relationships including with the U.S. attorney. “Some of our good cases could come from referrals.” Additionally, Kravis said the pool of people impacted by the division wouldn’t just be elected officials. It could include political candidates and senior government managers.

As he has been reviewing the DC Code, he has concluded that “it would be very helpful for the DC Council and Congress to expand” the OAG’s prosecutorial authority. “There are areas for legislative reform,” Kravis added.

Mendelson seems willing to give Racine the opportunity to create the new division. “I don’t know that I want to second-guess what he’s doing,” he said. “If it doesn’t work out, it could be abolished. And Racine has to stay within his appropriations.”

However, given Racine’s propensity for political flexing, he runs the risk of crossing the line in his role as AG, thereby jeopardizing the reputation of his office. He told me if he found himself facing a potential conflict of interest, he would recuse himself. That’s another area where Kravis is focused.

“One thing I have been talking about is how to have a sensible recusal policy and procedures in place,” said Kravis. “It’s important to be thoughtful about it in advance. It’s something that hasn’t been on the OAG’s radar.”

Maybe that’s because Racine has been spending too much time in the mirror.

RT @LouiseMensch: Translation: @Russia: “please don’t remove us from SWIFT, America, you’re gonna do it aren’t you” (incoherent gibbers of…

RT @ericgarland: Local Traitor Plans to Ride This Train All the Way Over the Cliff into an Active Volcano Below https://t.co/iSHjVWFBuK

RT @joncoopertweets: Georgia has a VERY strong case against Trump, according to a detailed legal analysis by the Atlantic’s David French.…

RT @jason_corcoran: Goodbye #ruble Tuesday: JP Morgan has completely withdrawn from the Russian ruble. The largest US bank has closed all…

RT @caslernoel: Most folks who truly understand how wealth, politics and media function in this country don’t bother speaking out because t…