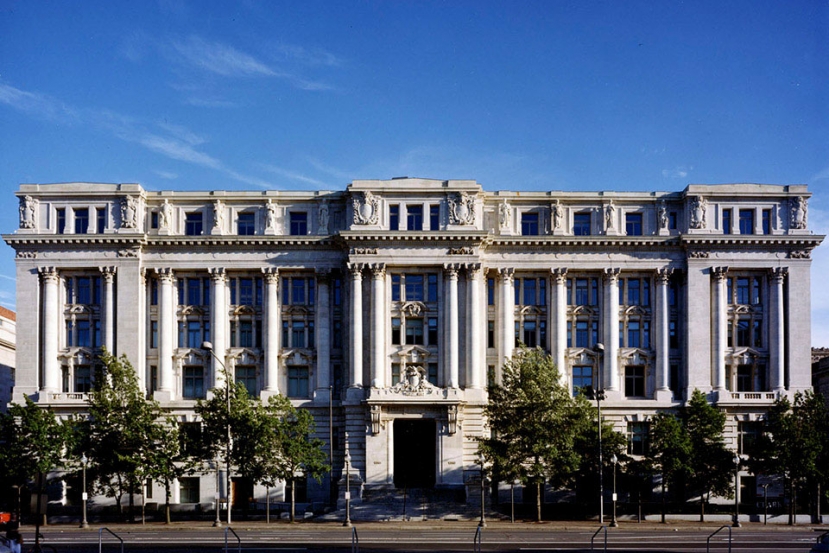 Council of the District of Columbia

Some top executives in DC Mayor Muriel Bowser’s administration appear to be suffering from amnesia. Maybe it’s the stress of dealing with the novel coronavirus pandemic and public health emergency.

How else to explain why they are intent on pushing through a Medicaid contract with a company — MedStar — whose past behavior jeopardized the fiscal health of two other managed care organizations and damaged the entire program? Another company with whom the District is seeking to finalize a contract — CareFirst — owes the city millions of dollars in cash or services; it also appears to be flaunting DC small business certification laws, with tacit support from government officials.

As a nonprofit, charitable corporation, CareFirst BlueCross BlueShield is supposed to be in the giving business. Instead, it has shown a propensity for hoarding. For example, as of 2007, it had a surplus of $754 million that it refused to share with any needy population in the Washington metropolitan region.

“Instead of providing charitable [contributions] to the community, they have been putting money into surpluses and paying large executive salaries. We’re basically asking for a reshaping of the entire CareFirst organization in DC,” Nickles told The Washington Post at the time of the filing.

Meanwhile, Walter Smith, executive director of the DC Appleseed Center for Law & Justice, persuaded the legislature to take a different course of action. The council passed a law that required the commissioner of the DC Department of Insurance, Securities and Banking (DISB) to evaluate the size of the CareFirst excess surplus and determine how that should be spent. That move by the legislature eventually ended Nickles’ lawsuit.

In 2009, there was a hearing before the insurance commissioner. The next year, the department found that CareFirst had no excess surplus. Smith told me during an interview last week that he had been incredulous. Consequently, in 2010, he took the matter to the DC Court of Appeals.

A decade after the fight with CareFirst began, little has changed. “We’re in a public health emergency,” Smith told me last week. “They have a rainy day fund that is bigger than the rainy day fund of the District of Columbia. We have been urging CareFirst to spend down its excess surplus to address community health care needs.”

Appleseed has been in the ring nearly that entire time, battling CareFirst and the city’s own insurance commissioner on behalf of District residents. In 2012, a three-judge panel in the Appeals Court ruled in Appleseed’s favor and told the insurance commissioner to try again. It took the commissioner six years to provide the court a  new calculation. In 2018, the department said CareFirst was holding only $51 million of excess surplus and ordered it be distributed as rebates to subscribers.

This is, my friends, your government at work for you. Smith said at least 90% of CareFirst’s subscribers live outside the city.

Unsurprisingly, in 2019 CareFirst appealed the insurance commissioner’s new decision, reasserting, yet again, that it had no excess surplus. However, Smith said that by his calculation, CareFirst is sitting on a $300 million cache. He also appealed the finding.

Five weeks ago, Smith went back to the Appeals Court, asking that it order the District insurance commissioner to correctly calculate the amount that should come to the city. Insurance commissioner Karima Woods indicated through a spokesperson that as of Dec. 31, 2011, CareFirst’s surplus was $963,581,310. That appears to be the base amount that could be used in making a decision about what is or isn’t excess.

Woods was appointed to head DISB in January 2020 but only confirmed by the council last month. She is the sixth person to hold the position of insurance commissioner since the department began dealing with the case against CareFirst.

Woods acknowledged that on Aug. 29, 2019, the Appeals Court instructed her office to explain several outstanding issues and to indicate “what steps were undertaken to coordinate the surplus review with Maryland and Virginia.” This week, she is supposed to provide her response to Smith’s filing of five weeks ago and the court’s order from a year ago.

“I intend to inform the Court of Appeals that I have reviewed its August 29, 2019 decision and have begun the process [of] addressing the issues set forth in the Court’s order,” Woods said via an email sent by her spokesperson Paul Drehoff.

Let’s assume that Appleseed’s estimate of a $300 million excess surplus is accurate.. Stop and think for a minute how just a portion of that amount could help some of the city’s most vulnerable residents — many of them people of color who have been hardest hit by COVID-19.

Back in 2016, long before the catastrophic arrival of the novel coronavirus, the Urban Institute prepared a written assessment of the health needs in DC and surrounding jurisdictions — from which CareFirst also withheld funds.

“CareFirst could invest in numerous interventions to improve the health of the communities it serves,” says the Urban Institute report, which anticipated the possibility of the $51 million excess surplus as calculated by DISB. “We identified several evidence-based interventions that could be implemented to improve access to care in underserved areas, reduce disparities in chronic disease, and improve the mental health of adolescents.”

Interestingly, during the DC Council’s 2021 budget deliberations there was intense disagreement over raising taxes to help fund some of the very services the Urban Institute indicated CareFirst’s surplus could finance.

Still, CareFirst is holding onto its money. But it wants DC taxpayers’ hard-earned dollars.

It is in the queue to receive a sizable share of the District’s $1.5 billion annual Medicaid managed care contract. That is one of the largest procurements in the city — larger than the much-debated sports wagering contract, and larger than most if not all individual affordable housing development agreements. So, expect me to give this issue its proper attention.

To better position itself to snatch and grab more public dollars, CareFirst decided to purchase Trusted Health Plan, which already had a contract with DC as a managed care operator. That deal cost CareFirst $82.5 million, according to documents filed in December 2019 with DISB: $40 million was to be paid at closing; another $32 million was promised if Trusted won the new contract; and $10.5 million would come if that contract successfully jumped the hurdle of any protests by competing companies.

Interestingly, Trusted had its own surplus of $19 million, according to government documents. CareFirst indicated that at the time of sale Trusted would need to ensure it had at least $17 million in surplus. That last provision underscores CareFirst’s continued commitment to hoarding.

The city’s insurance commissioner did not oppose the sale. She never mentioned in her approval documents that there was a case still in court. Nor did she mention that CareFirst might owe the city as much as $300 million in services or cash.

“The standards for reviewing acquisitions and conducting reviews of CareFirst’s surplus are distinct and separate, and accomplish different objectives,” Woods said through her spokesperson. “The Department’s review of CareFirst’s acquisition of Trusted Health Plan did not take into consideration the District’s excess determination.”

Am I the only one who thinks it should have?

At least one thing has gone right thus far. Three council members — Phil Mendelson, Kenyan McDuffie and Robert White — filed a disapproval resolution last week, temporarily preventing the Bowser administration from moving forward with the procurement. However, no one made mention of the CareFirst litigation or the company’s outstanding debt to the District either at the July 29 hearing on the contracts or as reason for filing the resolution.

McDuffie, chair of the Committee on Business and Economic Development, said in a prepared statement at the time that he thought the managed care procurement process “worthy of deeper scrutiny. My top priority is in ensuring that District residents, especially our most vulnerable, get the appropriate coverage they need and deserve, especially in light of an ongoing public health emergency.”

He also noted there were other questions, including how certified business preference points once held by Trusted Health Plan were transferred to CareFirst BlueCross BlueShield after it bought Trusted. That plus “bid reductions, irregularities in the procurement process, and multiple complaints filed with the DC Contract Appeals Board raised considerable red flags that each merit stricter scrutiny,” added McDuffie.

White, chair of the Committee on Facilities and Procurement, offered similar concerns in an email to me. “The major outstanding question is how our local certified business enterprise, or CBE, program ended up benefiting a large national nonprofit. This reflects broader issues I have seen with the CBE program in other contracts.

“I look forward to getting a better understanding over the coming weeks,” added White.

Good luck with that.

I exchanged multiple emails for multiple days with Kristi C. Whitfield, director of the Department of Small and Local Business Development, trying to get a handle on what happened. George Aloth, president and CEO of CareFirst BlueCross BlueShield Community Health Plan, said during last Wednesday’s roundtable that Trusted had received a recertification the day before.

Whitfield told me via email that it “was not a recertification of the business.” She said  that because Trusted had changed ownership, the law mandated adjustments to the information on file with the District and to the certification preference points. She also said that, in fact, Trusted’s business name “remains the same with a new trade name CareFirst BlueCross BlueShield Community Health Plan District of Columbia.”

Aloth did not respond to my email requesting an interview. However, in the insurance commissioner’s documents, CareFirst is listed as “the ultimate owner.”

According to sources, Trusted informed DC officials of the pending sale even before the managed care contract solicitation was issued on Jan. 10, 2020. By the procurement cutoff date in February, the sale of Trusted to the nonprofit giant was already finalized, according to Aloth’s testimony at the roundtable.

By law, only for-profit companies can be certified and receive associated preference points. In government solicitation documents, a contracting officer made it clear that such certification had to happen “prior to submission of their project.” That may explain why CareFirst has been trying to hold onto the Trusted name and attempting to ride those local, small minority business preference points.

My exploration of the government’s handling of the CBE preference points will continue. The council is expected to make some determination about the contracts in late September.

Thus far, what is most baffling to me is, How did a scofflaw like CareFirst get to the table, even if it is one of the major health insurers in the city? Equally disconcerting is this: How could District officials genuinely consider using taxpayers’ money to hire CareFirst to provide health care services that by law it should have been providing with the hundreds of millions of dollars it has hoarded illegally for more than a decade?

Garland is the biggest disappointment of the Biden administration and arguably his most important cabinet member https://t.co/p6aHl6Ml4i

RT @SundaeDivine: Over the last 10 presidential administrations, 330 of 335 indictments for criminal offenses were against Republicans, but…

RT @AZ_Brittney: Raise your hand if you are still Ridin with Biden. I want to follow you!

RT @GovHowardDean: Franken from Iowa is only three points behind the fossilized Grassley who has a significant negative rating among Repub…

RT @ElectBlue2022: Russia is a terrorist country and Republicans are terrorists supporters!! See a connection?? #DemVoice1

RT @FearlessPAC: Gen Z is more energized than ever to turn out in November, but we need your support. We are a student-led organization fi…

RT @MayoIsSpicyy: Do you think members of the GOP will visit Putin again on the 4th of July?